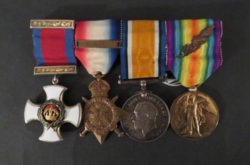 ‘For conspicous gallantry on 23rd. October, 1914, near Bixschoote, when he led his company in the attack and couageous example contributed greatly to the success achieved. He was wounded in the action’.

‘The Brigadier General desires, 1st L.N. Lancashire Regiment, which when advancing  steadily under heavy shell and rifle fire, aided by it’s machine guns, was able to form up  within a comparatively  short distance of the enemy’s trenches. Fixing bayonets, the Battalion then charged, carried the trenches then occupied them, and to them must be alloted the majority of the prisoners captured.’

The battalion diary records ‘About 350 of the enemy threw up their hands and surrendered. the dead were lying all over the place and numbered about 400; we had to empty  the trenches of the killed before we could occupy them.’

With fine copy group photo of the battalion officers who are identified.

Mounted as worn and a fine 1914 group