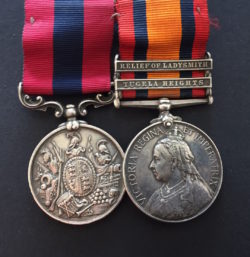 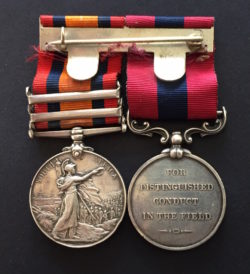 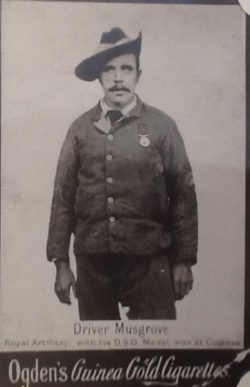 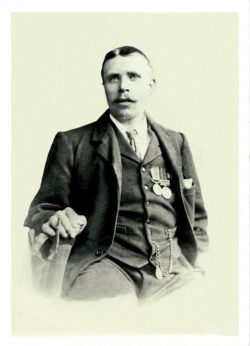 With copy photos of Ogden’s Cigarette Cards of the recipient wearing his D.C.M. from theit heroes of the Boer war series and a further in civilian clothes wearing both medals

An award for the epic attempt by Captain Reed of 7th Battery, (wounded and awarded the V.C.) and thirteen other ranks  of the battery to save the guns which was only discontinued after half of the men and the majority of the horses fell casualty.

Thomas Henry Musgrove was born at Furnace Row, Pye Bridge In 1872. He is recorded in the 1891 census as a Pork Butcher. He managed his father’s shop which was situated at 14, Lower Somercotes.  Sometime in the following few years he joined the British Army. An extract from the Boer War records show:

Thomas Musgrove served in the 7th Battery, Royal Field Artillery. This unit was posted to South Africa to fight in the Boer War. The 7th Battery took part in several major actions, and on the 15 December won great distinction at the Battle of Colenso in efforts to rescue the guns of the 14th and 66th Batteries of the R F A, where Thomas won the Distinguished Conduct Medal.

The War Diary of the 7th Battery, R F A records the journey to South Africa and the Battle of Colenso. An extract follows:

1899. 28 November – Four guns of the Battery accompanied a mounted force under Lord Dundonald in a reconnaissance towards Colenso, were engaged for 20 minutes with Boer Artillery posted on N. side of Tugela.

1899. 6 December – The Battery went out with a mounted force which accompanied Sir R Buller on a reconnaissance towards the Tugela; saw none of the enemy.

1899. 15 December – Battle of Colenso. The 7th Battery accompanied Mounted Troops under Lord Dundonald, which were to attack on the extreme right. Capt. H L Reed awarded the V.C. and 13 men the medal for D.C. in the Field for endeavouring to withdraw guns of 14th and 66th Batteries.”

(Note that the card states he received the D.S.O., but he was actually awarded the D.C.M.)

Sir, I have the honour to bring the following cases of Distinguished Service in the Field to your notice: “At Colenso, on December 15, the detachments serving the guns of the 14th and 66th Batteries, Royal Field Artillery, had all been either killed, wounded or driven from their guns by infantry fire at close range, and the guns were deserted.

About 500 yards behind the guns was a donga, in which some of the few horses and drivers left alive were sheltered. The intervening space was swept with shell and rifle fire.

Captain Congreave, Rifle Brigade, who was in the donga, assisted to hook a team into a limber, went out and assisted to limber up a gun, being wounded, he took shelter, but seeing Lieutenant Roberts fall badly wounded, he went out again and brought him in. Some idea of the fire may be gathered from the fact that Captain Congreave was shot through the leg, through the toe of his boot, grazed on the elbow and the shoulder, and his horse shot in three places. Corporal Nurse, Royal Field Artillery, 66th Battery, also assisted. I recommend the above three for the Victoria Cross.

Drivers H Taylor, Young, Petts Rockall, Lucas and Williams, all of the 66th Battery, Royal Field Artillery, rode the teams, each team brought in a gun. I recommend all six for the Medal for Distinguished Conduct in the Field.

Shortly afterwards Captain H L Reed, 7th Battery, Royal Field Artillery, who had heard of the difficulty, brought down three teams from his battery to see if he could be of any use. He was wounded, as were five of the thirteen men who rode with him; one was killed, his body found on the field, and thirteen out of twenty-one horses were killed before he got half-way to the guns, and he was obliged to retire.

I have differentiated my recommendations, because I thought that a recommendation for the Victoria Cross required proof of initiative, something more, in fact, than mere obedience to orders, and for this reason I have not recommended Captain Schofield, Royal Artillery, who was acting under orders, though I desire to record his conduct as most gallant.

Several other gallant drivers tried, but were all killed, and I cannot get their names – I have… etc.

(Note: Captain Schofield’s actions were considered to be so gallant that he was eventually awarded the Victoria Cross)

Thomas was badly wounded in a further action and returned home in 1900 to a hero’s welcome. It was reported that he was carried shoulder high by locals from Pye Bridge Railway Station to his home.

He married Charlotte Herbert in 1903 and they had six children, one of whom was born in Somercotes. Thomas found employment at Hampton Court Palace (recommended due to his war service). His wife Charlotte died in 1915 and in 1918, Thomas, in poor health, returned and settled in Leabrooks. He died in November 1919.

A report on his death was published in the Ripley & Heanor News on Friday 14 November 1919, which read: “DEATH OF A SOLDIER HERO – DRIVER T H MUSGROVE D.C.M. OF SOMERCOTES – The death took place on Thursday last at Belper Infirmary, of ex-Driver Thomas Henry Musgrove D.C.M. at the age of 48 years. Many will remember [the] deceased as one of the Colenso heroes in the Boer War, of whom General Buller in his report to the War Office said they were worthy of the Victoria Cross. Lord Roberts’ son won his V.C. on the same occasion. Musgrove’s letters from the front were published and read with avidity at the time. After being invalided back to England and the time came for him to visit his home at Somtes, news spread like wildfire and a huge crowd assembled at Pye Bridge Station to welcome him. After Driver Musgrove’s discharge from the Army, caused by the effects of wounds, through the influence of Lord Roberts he was placed on the staff at Hampton Court Palace. Increasing infirmity caused him to relinquish the position and the last few months he has struggled on until a few weeks ago he came to Leabrooks where his motherless children were living with relatives. About a week before he passed away, we regret to say that he was removed to Belper Workhouse Infirmary. Through the good offices of Mr A J Gwatkin, the official visitor of the Alfreton District of the Hearts of Oak, arrangements were made for the internment to take place at Leabrooks Cemetery on Sunday last. A bearer party from Derby, under Sergt. Riffel of the Notts and Derby Regiment, carried the coffin which was draped with the Union Jack and the “Last Post” was sounded by Bugler Nadin, Notts & Derbys. The ceremony was performed by the Rev. Birtwistle, vicar of Somercotes. The mourners were the six children, Mrs. Hole (sister of Sunderland), Mr John Musgrove (brother of Heanor), Miss Musgrove (sister of Somercotes), Mr and Mrs Elmes (brother-in-law and sister, Marehay), Mr Saml. Herbert (brother-in-law of Ripley) and Mrs Peat (sister-in law of Leabrooks). Owing to infirmity, the mother of the deceased was unable to attend; also the brother, Arthur of Hull was not able to follow. Messrs Jones, Oakley, Brown and Needham represented the Discharged Sailor’s and Soldier’s Association; ex-Sergt. Brewster of Alfreton, an old friend of the deceased, and Mr A J Gwatkin of the Hearts and Oaks Benfit Society were also present.

Mounted as originally worn. A direct purchase and first time to the market.

We could not identify the nature of his wounds referred to. His papers simply state discharged  21/3/1901 medically unfit for further service