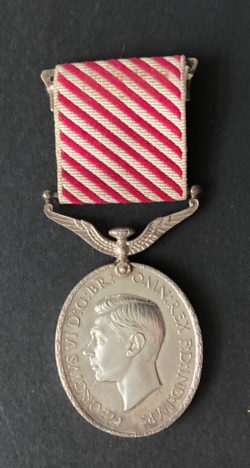 A.F.M (GV1) entitled to D.F.M. B.E.M. awarded D.F.M. and A.F.M. whilst aged over 50 for work with special wireless equipment counter measures against the German offensive beam system during with he took part in 19 ops connected with the ‘Trinity’ system

This airman is employed as an air-borne operator on special wireless equipment. He has shown exceptional ability and has been responsible for making a valuable contribution to radio counter measure flying. He is an untiring worker and possesses a vitality and keenness that could be considered outstanding in a man half his age. He is 52 years old and has rendered invaluable service in all aspects of his trade.’

‘This N.C.O. has been employed in a wireless investigation and development unit in No.109 Squadron as a Special Wireless Operator since 21st June 1940. He has carried out 139 flights concerned with counter measures against the German offensive beam system and has proved himself to be exceptionally capable and reliable in his duties. Of his 19 operational flights, 8 have been flights for the ‘TRINITY’ operations. Sergeant Kyle is 51 years of age and by his great energy and enthusiasm and his complete disregard for danger, he has set a superb example to all flying personnel. His excellent effect on the morale of the aircrews, particularly in connection with the ‘TRINITY’ operations cannot be too highly praised.’

B.E.M. Civil award for services with the Ministry of Civil Aviation