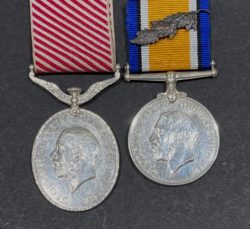 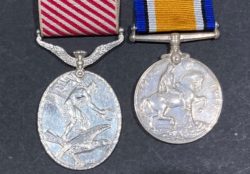 Served 216 Squadron. One of nine Air Force Medals awarded to the Squadron for service in Palestine.
William Joseph Glyde was born at Brighton, Sussex on 3 August 1892. He enlisted with the Royal Navy on 6 August 1910 as Carpenters Crew, serving mainly at shore establishments in that time though during the 1911 census he was aboard H.M.S. Triumph at Malta. Later Glyde served aboard the experimental seaplane Carrier H.M.S. Hermes from 18 May-23 December 1913. Promoted Air Mechanic on 1 July 1915 while serving in Britain. Appointed Petty Officer Class III on 1 June 1915 and Chief Petty Officer Class III on 1 September 1917.

No. 216 Squadron served in Egypt in October 1919,  based at Kantara, flying  Airco DH.10., and the Vickers Vimy. The RAF took the leading role in the British occupation of Iraq and during the 1920s they faced increasing local resistance to the British presence in the region. As a result the link between Iraq and Egypt was increasingly important as a moral boost to British soldiers in those distant garrisons, a journey of some 1,720 miles, with basic instruments and few landmarks, with flight times sometimes lasting as long as 24 hours

Glyde  appears on the 1939 census as a Carpenter Foreman living at the Military Camp, Broadbridge Heath, Horsham, Sussex. died 1954 at Brighton.