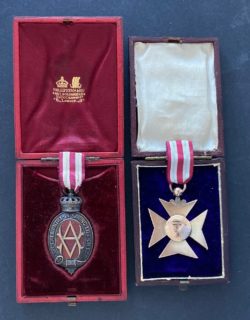 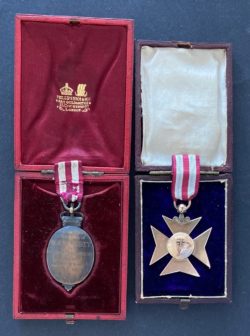 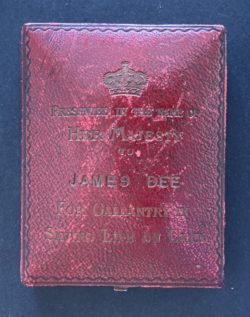 Albert Medal Second Class for Land and Gold Bravery Cross pair awarded to Police Constable J. Dee, Swansea Police Force, for his heroic conduct in attempting to save life during a fire at Swansea on 20 January 1883. A particularly fine early award with maker’s named and numbered cartouché with named embossed case of issue

Albert Medal Second Class for Land and Gold Bravery Cross pair awarded to Police Constable J. Dee, Swansea Police Force, for his heroic conduct in attempting to save life during a fire at Swansea on 20 January 1883

Add to Wishlist
SKU: A8985 Category: Awards For Gallantry And Distinguished Service

‘For conspicuous gallantry displayed in endeavouring to save life at a fire, which occurred in Swansea on the morning of Sunday 20th January last.’

P.C. James Dee, Swansea Police Force, was born in Llanelly and was awarded the Albert Medal for his gallantry during a fire at 62 New Oxford Street, Swansea in the early hours of Sunday 20 January 1883, when he ascended a ladder into a burning building to look for two missing children. The premises belonged to a Mr. Williams and his wife a General Merchandise Dealer and Oil Merchant with eight children. Dee located one child and passed him through a window, alive at the time of rescue, although the child died shortly after being conveyed to hospital. Re-entering the building, by now an inferno, he searched for but could not locate the second child who was found dead under a bed once the fire had been extinguished. Dee was badly burnt around the face, neck, ears and hands and was admitted to Swansea Hospital where he made a full recovery.

For his gallantry Dee was recommended by the Swansea Watch Committee for the Albert Medal First Class, and in the event was awarded the Albert Medal Second Class, being presented with the award by the Mayor of Swansea at the Guildhall on 21 March 1883. He also received a privately commissioned Bravery Cross in Gold  from his home town of Llanelly.

Within six months, however, ‘Dee had committed two acts that the Watch Committee consider very unworthy in a Policeman, the result is he had been dismissed from the force. The first of these acts was the using undue violence in apprehending a person and using without necessity his truncheon for which offence he was fined £1 by the Watch Committee. A few days after a Publican was summoned for serving Police Constable Dee with beer while on duty and it transpired that Dee endeavoured to get the Publican to swear that he had sent for him (Dee) to quell a disturbance that was taking place in the house.’ (letter from the Town Clerk of Swansea to the Home Secretary refers). The Home Secretary, in his reply, stated that in his opinion the offence did not seem serious enough to justify the Medal being forfeited.