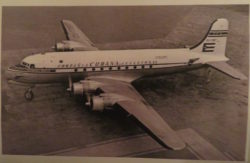 'Mr. Foggo and Mr. Lamb were members of a volunteer crew of a Pilot Boat which put to sea in an attempt to save survivors of an aircraft which crashed in Bermuda waters. The two men subsequently manned a six foot dinghy taking on board two survivors and two others who subsequently proved to be dead. The dinghy was small and leaking and conditions were extremely hazardous with a strong wind and rough sea. When picked up the dinghy was awash and on the point of sinking. There is no doubt that Foggo and Lamb risked their own lives to save the lives of the survivors.'

On the 6 Dec. 1952, the 'Estrella de Oriente (''Star of the East') a Douglas DC.4 operated by Cubana de Aviacion flying from Madrid to Havana, crashed into the sea 2.8 miles off  N.E. of Bermuda-Kindley Field following a refuelling stop of Kindley Air Force Base in Bermuda. There were 33 passengers and 8 crew on board. During the initial climb, the aircraft stalled, lost height and crashed tail first into the sea of St. Georges Harbour and burst into flames upon hitting the water. the U.S Coast Guard rescue boats had trouble approaching due to burning gasoline spreading over the waters.

The cause was not determined and remains the worst aviation accident in Bermudan history.