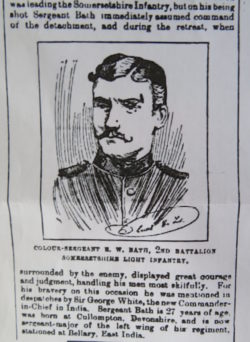 Product added! Browse Wishlist
The product is already in the wishlist! Browse Wishlist
SKU: A8207 Category: Awards For Gallantry And Distinguished Service
D.C.M., (V.R.) (Sergt  2/Som: L.I. 26th June 1886.), I.G.S. 1854, clasp, Burma 1885-7 ( Sergt. 2nd Bn. Som. L.I.); Q.S.A.  5 clasps, C.C., Tug. Hgts, O.F.S., Rel. of Ladysmith, Tr.  (Sjt. Maj.  Somerset: L.I.), B.W.M. (Pte.  R.M.)
D.C.M. awarded for action at Quingyee, Upper Burma, 26 June 1886. Recommended for a commission in the field, awarded D.C.M. instead.
Recommendation
‘Colour-Sergeant E. Bath – The officer commanding his detachment having been shot in action, Colour-Sergeant Bath continued the action and brought it to a successful conclusion.’
Edwin William Bath B. Portsmouth 1865. In a letter to The Secretary of State for War, dated 14 November 1920, Bath states his service:
‘I respectfully beg to request that you will allow me to receive the War Gratuity as a Warrant officer for the period September 1914 to 9th April 1915. I was for eight years Sergeant Major of the Somerset Light Infantry prior to going on pension. I rejoined the Colours in Septr. 1914 as a Warrant Officer, was sent to Codford Camp to form the 10th Devons, was training officers and NCOs for one month when I received a Commission as Lieut. and Quartermaster in the XI Cheshire Regt. on October 14th 1914 which I held until April 1915 when I was allowed to resign my commission as the result of a Medical Board after illness. I applied to the Sec. War Office for the gratuity but was informed that as I had not been on full pay as an officer for 6 months I was not entitled. I received the thanks of my Comdg. Officer (Col Dyas) the day I left the Battn., for the good hard work I had done as Lieut. & Qr. Mr., expressing a hope that I would return when my health permitted; I served since as a Corporal in the Royal Marine Labour Corps for sixteen months prior to the Armistice, was demobilised in March 1919, rejoined again as Sergeant in the R.A.S.C. British Military Mission South Russia, demobilised July 1920. Served in the Burmese War 1885-7. Awarded the D.C.M., also in the Boer War 1899. 1900. 1901. 1902. So having failed to qualify for the officers gratuity, would you grant my request as above.’
The History of the Somerset Light Infantry (Prince Albert’s) 1685-1914, by  Everett, records
‘On 24th June [1886] Lieutenant H. T. Shubrick marched with 2 guns and 30 men of the Regiment from Pyinmana to Theagon on the Yamethin Road about 6 miles distant. After destroying several villages near Theagon on the 26th, Shubrick occupied the hamlet of Quinqyi [sic], where, while halted for breakfast, he was attacked on all sides by dacoits. After some fighting the enemy were driven off, but Shubrick himself was killed, being struck in the neck by a bullet, while two men were wounded. The force then returned to Pyinmana under Lieutenant Coxhead, R.A. Serjt. E. A. [sic] Bath, who assumed command of the detachment of the Regiment on the death of Lieutenant Shubrick, was afterwards mentioned in despatches for gallant conduct on this occasion and was awarded the silver medal for distinguished conduct.’
Bath, during his nomination for a commission during the Great War, later wrote of the event that he had been ‘Recommended by Sir George White for a commission in 1886 for distinguished conduct in the field but received D.C.M. instead.’
During the Second Boer War, Bath continued to serve with the Regiment and received a special mention for his services in Lord Roberts’s Despatch of 4 September 1901. After continued and varied service during the Great War and in South Russia he was finally discharged in July 1920.
Bath would appear further sent a  Victory Medal, which according to his MIC he was issued with under Army authority in May 1931, his British War Medal having been previously issued under Naval authority.
1 of 11 D.C.M.s awarded for the various Burma campaigns between 1885-91, including 2 to the Somerset Light Infantry