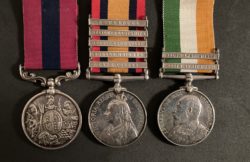 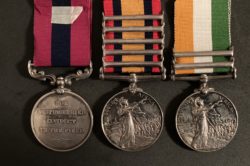 D.C.M. (VR), 1. Yorks. & Lancs. group Superb Pieters Hill 27/02/1900, group. Commended by Colonel Kitchener under whose observation and under heavy fire took the battalion maxim gun up the hill whilst under heavy fire and coming up to the rear of one of the Boer trenches poured a heavy fire into it clearing it of the enemy

Colonel Kitchener, Commanding Brigade, reports that “he did excellent work under my personal observation. His gun was under heavy fire and he never slacked off or made a mistake, it’s coming into action on our right rendered advance possible.”.

The award of the DCM was announced in the LG of 19 April 1901, p2707. An eyewitness account of the day’s action was given by Pte A. Long in his handwritten “Rough Diary of York & Lanc Regt in South Africa”:

“The order came ‘Maxim gun up quick’. Quick as a flash one of the gunners had his rifle slung on his back (Pte Koerner by name) and getting on top of the cutting had the gun handed up to him by 3 or 4 men standing about 2 feet above each other. Shouldering the gun, he carried it to the top of the hill although burning his neck both sides as the barrel was full of boiling water…

One of the W Yorks carrying the tripod whilst the Sergt carried two boxes containing two loaded belts.

Through a very heavy shower of bullets they carried them to a suitable place behind one of the enemy’s trenches which proved to be too high for it but he soon removed the top stones which a bullet struck whilst he was in the act of removing, but there was no time for hesitation, the Maxim being set it soon started its deadly work pouring a rapid fire into a donga, 830 yards off which soon cleared the enemy.”

With research and copy of discharge papers recording operations for the relief of Ladysmith including actions of Spion Kop and Pieter’s Hill.  Special instances of gallantry – action of Pieter’s Hill 27.02.1900 awarded D.C. Medal.’