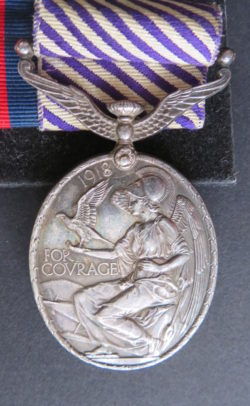 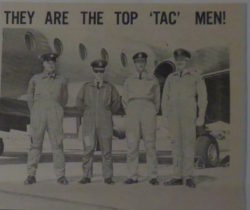 'In recognition of gallant and distinguished services in Kenya'.

The recommendation for the award from  The National Archives, Kew, in AIR file 2/12423. It states:-

“Flight Sergeant Erasmus joined 1340 Flight in Jul 1953.  Since then he has completed 407 sorties against the Mau Mau in Harvard aircraft. In addition he has flown 30 Skyshouting sorties in Auster aircraft. He has completed, in all, 700 hours flying on operational tasks. In the last six months he has flown 300 hours and his total flying since joining the RAF is 3,000 hours. Apart from being the longest serving member of 1340 Flight, Flight Sergeant Erasmus is a determined and successful section leader. He is willing at all times, to undertake any duty however short the notice and however difficult the task. His cheerfulness is a tonic to everyone and he sets himself a standard well worthy of the highest traditions of the Royal Air Force. I strongly recommend the award of the Distinguished Flying Medal.

“Flight Sergeant Erasmus has performed long and outstanding service in Kenya in hazardous operations in all weathers. I most strongly recommend the award of the Distinguished Flying Medal.”

No. 1340 (Special Duties) Flight RAF (1340 Flt) was a flight of the Royal Air Force. In its first formation in India it was equipped with Vultee Vengeance Mk. IIIs and a single North American Harvard. In its second formation in Kenya it flew Harvards.

Although Harvards were mostly used by the RAF as trainers or target tugs, the aircraft of 1340 Flt in Kenya were armed with 20 lb (9.1 kg) fragmentation bombs and a machine-gun, for operations against the Mau Mau in Kenya in the early 1950s.

The flight was re-formed on 23 March 1953 as No. 1340 (Anti-Mau-Mau) Flight RAF at RAF Thornhill, Gwelo, Southern Rhodesia (now Gweru-Thornhill Air Base, Zimbabwe), in response to the Mau Mau uprising in neighbouring Kenya. Much of the air activity took place in the forested areas around Mount Kenya and the Aberdare Range north of Nairobi, where the Mau Mau fighters were hiding out.

The flight arrived at RAF Eastleigh, Nairobi, Kenya, on 27 March 1953, commanded by Squadron Leader Charles G. St. David Jefferies, equipped with 12 Noorduyn Harvard IIBs, eight operational and four in reserve, with two being serviced any one time. The aircraft were fitted with bomb racks under the wings to take eight 20 lb (9.1 kg) fragmentation bombs and a single Browning .303 machine gun under the starboard wing, with the ammunition carried inside the wing.

They were assisted by five Piper PA-22 Tri-Pacer aircraft belonging to the Kenya Police Reserve Air Wing (KPRW). In October 1953 six RAF pilots were seconded to the KRPW to fly the Tri-Pacers.

1340 Flight, along with the KPRW Tri-Pacers deployed forward from Eastleigh to Nyeri airfield, which lay between Mount Kenya and the Aberdare Range Operations. Working with the Army or local security forces on the ground, the Tri-Pacers would drop phosphorus grenades (e.g. No. 76 Special Incendiary Grenade) from the cockpit as markers, followed by the flight of eight Harvards which dropped their bombs on the target.

The effectiveness of the Harvards in these conditions may be evidenced by a prisoner statement 'from a prisoner's statement: "Gatheru S/O Wairegu—surrendered September 5th, 1954. In July 1953 he was at a meeting called by Dedan Kimathi on the Aberdare Moorlands. Approximately 1,000 Mau Mau were there when the area was attacked by nine Harvards. The meeting broke up and he states that casualties were high. In January 1954 he was bombed on the Chania. Of 145 in his gang he states that 105 were killed. The record for this month alone was 504 sorties flown, 3,974 bombs dropped, 187,240 rounds of ammunition fired and 532 operational hours flown.