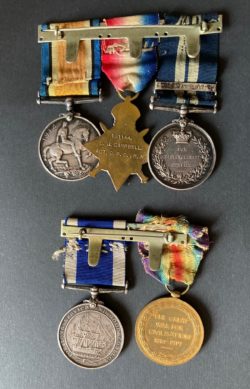 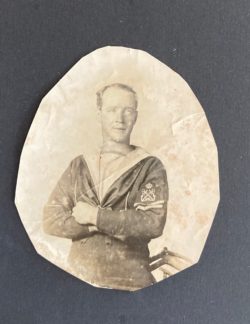 Approx 69 Bars to the D.S.M. awarded for the Great War, including second bar awards.

D.S.M. London Gazette 22 May 1917:
‘In recognition of services in the Destroyer Patrol Flotillas, Armed Boarding Steamers, &c., during the period which ended on the 30th September 1916. H.M.S. Zinnia Patrol Services up to 1 October 1916.’

Possibly connected to  the Easter Rising / Roger Casement affair in April 1916, when Zinnia was closely involved in the capture of the German steamer Aud, which was disguised as a Norwegian vessel.

The recommendation states: ‘H.M.S. Zinnia. Action with enemy submarine 4 May 1917. As Gunlayer with A.B. Arthur Waller, J15735, as Trainer, these men performed their duties in a highly satisfactory manner.’

Following commissioning in 1915, Zinnia joined the First Sloop Flotilla, based at Queenstown. On 28 March 1916, Zinnia spotted the German submarine U-44 63 nautical miles ESE of the Fastnet Rock, shooting twice at the submarine, which dived away unharmed, Zinnia’s shells falling short. On 29 March, U-44 torpedoed the sloop Begonia, which did not sink. Zinnia and sister ship Snowdrop were ordered to go to Begonia’s aid, and the damaged sloop was towed into Queenstown. On 20 April 1916, Zinnia came across the German submarine U-69, south-west of Ireland, just after U-69 had sunk the steamer Cairngowan, forcing the submarine to dive away, and dropped two depth charges, but U-69 was unharmed.

On 22 April 1916, Zinnia, and also H.M.S. Bluebell but from another direction, intercepted the Aud, a German vessel (Libau) disguised as a Norwegian steamer, which had been attempting to rendezvous with Sir Roger Casement in Tralee Bay to deliver a consignment of arms for an imminent uprising in the southwest. She was being escorted to Queenstown when Lieut. Karl Spindler scuttled her west of Skellig Rock. Casement himself was arrested , found guilty of high treason and hanged in August, 1916.

On 23 October 1916, the sloop Genista was torpedoed and sunk by the submarine U-57 120 nautical miles west of Cape Clear Island. Zinnia and Camellia were ordered out from Queenstown to pick up her survivors, but at first failed to find them, and were joined by the cruiser Adventure. Eventually, 12 survivors were picked up.

On 8 March 1917, Zinnia encountered a German submarine, possibly U-53, off Fastnet, and opened fire, claiming an apparent hit on the submarine. On 28 March 1917, Zinnia was escorting the tanker Gasfa 15 nautical miles out of Queenstown when the submarine U-57 torpedoed and sunk Gasfa. Zinnia retaliated with two depth charges, which the submarine’s crew considered ‘uncomfortably close’, but the submarine escaped. Seven of Gasfa’s crew were killed in the attack, with the remainder rescued by Zinnia.

On 7 June 1917, the Q-ship Pargust was on patrol off the south coast of Ireland when she was torpedoed by the German submarine UC-29. Part of Pargust’s crew abandoned ship as a ‘panic party’, in order to tempt the submarine to surface, which UC-29 did after thirty minutes. Pargust then opened fire, sinking UC-29. Zinnia, the sloop Crocus and the American destroyer U.S.S. Cushing came to the assistance of Pargust which was kept afloat by her cargo of timber, with Crocus towing Pargust into Queenstown, with Zinnia and Cushing in escort. On 20 August 1917, Zinnia collided with the American destroyer Benham, badly damaging the American ship, which was towed into Queenstown by Zinnia, which remained part of the First Sloop Flotilla at the end of the war.