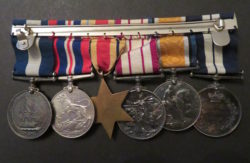 D.S.M. group Chief Engine Room Artificer, superb submarine award 1940, H.M.S Traiad, for patrols off the Norwegian coast and later killed in action during a close action submarine to submarine surface action when Traiad was sunk with all hands

Product added! Browse Wishlist
The product is already in the wishlist! Browse Wishlist
SKU: A8365 Category: Awards For Gallantry And Distinguished Service
Distinguished Service Medal, (GV1)  (Officially impressed C.E.R.A.1. H.M.S. Triad.), B.W.M. (B.Art. R.N.), N.G.S. clasp, Palestine 1936-1939 (E.R.A.1. R.N.),  Africa Star,  War Medal,  R.N.  L.S.G.C., (GV), coinage head (E.R.A.1. H.M.S. Lucia.)
D.S.M. L.G. 28/6/1940:
‘In recognition of daring, endurance and resource in the conduct of hazardous and successful operations in His Majesty’s Submarines against the enemy.’
John Gibson Buchanan B. Glasgow on  1901. He joined the Royal Navy as a Boy Seaman in 1916, (Boy Artificer) being shown as serving at H.M.S. Indus from 28 July 1916 until 5 January 1921 (not entitled to a Victory Medal). As E.R.A. 4 joined  H.M.S. Dolphin, the Royal Navy’s Submarine base, 1926.  and served in various submarine up to 1939.
As  Acting Chief Engine Room Artificer, joined the newly launched H.M. Submarine Triad in 1939. With a compliment of 59 and under Command of Lieutenant-Commander Jonas,  On 14 October, she departed on her first War Patrol, which was to patrol off the South coast of Norway. Returning on 5 November, Triad would return to the coast of Norway for another 5 patrols between November 1939 and March 1940. On 11 April, during Triad’s seventh war patrol and now under Lieutenant-Commander Oddie, she sank the German transport Ionia off the entrance to Oslo Fjord. During the following four months, Triad would complete another 4 patrols in the same area, attacking shipping on a number of occasions, being attacked by German aircraft and ships and encountering U-boats a couple of times.
On 29 August 1940, H.M. Submarine Triad, now under Lieutenant-Commander Salt, set off for service in the Mediterranean with the 1st Submarine Flotilla. Arriving at Gibraltar on 6 September, she set off on her 12th war patrol; patrolling off the Tyrrhenian Sea. Ending this patrol on the 2 October, Triad departed from Malta to Alexandria her 13th and final patrol on 9 October 1940. On passage she sighted the Italian submarine Enrico Toti, the following describes the action that followed:
‘At 01:00 on 15 October, Enrico Toti sighted a large submarine 1,000 metres (3,300 ft) to port: both boats manoeuvred into attack position. Italian accounts claim the British opened fire first, but all of Triad’s shells missed. (Other reports state there was a hit on the conning tower slightly wounded two Italian seamen) She also fired a torpedo which Enrico Toti avoided by turning sharply, then closed on the enemy submarine at top speed, firing as she approached. Soon, machine gun fire compelled the British gunners to abandon the exposed deck. As the British submarine started to dive, Enrico Toti fired a torpedo and hit the British submarine with two 120 mm shells. The boat rose vertically then disappeared without survivors. The action lasted around 30 minutes.
Traiad held the unfortunate record of being the only British submarine to be sunk by an Italian submarine during the war.
Wikipedia records ‘Famous Italian writer Dino Buzzati, then a very young navy war correspondent gave a lively account of the Traiad- Enrico Toti engagement. Though he was not directly on board the Italian submarine (he would later embark on an Italian cruiser and give a first hand account of the Battle of Cape Matapn Buzzati interviewed officers and sailors of Enrico Toti on its return to base and published the story in October 1940. According to sailors testimonies the commanding officer of Enrico Toti held his gun fire until he was in a favourable position to launch a torpedo, but both ships were so close that an angered Italian gunner threw his shoes at the head of his British counterpart as he could not yet fire the gun.’ (perhaps a little farfetched).
Chief Engine Room Artificer Buchannan  is commemorated on the Portsmouth Memorial 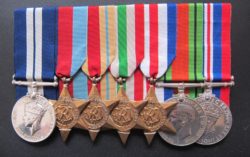