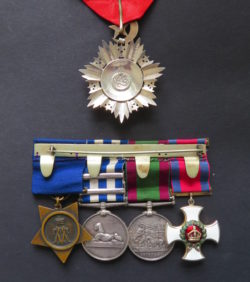 ‘In recognition of services during the action of Toski.’

‘In recognition of service in the actions at Toski and Gemaizah whilst actually and entirely employed beyond Her Majesty’s Dominions with the Egyptian Army.’

Aylmer Ellis Hayes , b. 9 November 1850 and studied at St.Mary’s Hospital in 1865, qualifying in 1871. Initially commissioned 2nd Lieutenant in the 1st Durham Engineers (Militia) in September 1872, he joined the Army Medical Staff in 1877,.passed the higher standard of Persian and gained the prize in Arabic open to officers of the Army.’  seeing active service in Afghanistan (Medal)

Served in the Sudan 1888-89 followed, for he was present at the actions of Gemaizah and Toski – serving as Principal Medical Officer of the Egyptian Army at the latter.

‘When the reconnaissance developed into a general action [Toski], Surgeon-Major Hayes quickly returned to the camp, arranged and increase of 80 beds on the 70 already organised, improvised a Bearer Column, and all wounded first received first field dressings as they fell and seriously wounded men were conveyed to hospital by stretcher parties and camels. This rapid organisation reflects great credit on Surgeon-Major Hayes.

I have every reason to be satisfied with all his arrangements for Egyptian wounded. In addition to the care of Egyptian wounded, Surgeon-Major Hayes had arranged for a large number of Dervish sick and wounded, and has worked night and day to alleviate their sufferings.’

Latterly serving as Registrar and Secretary to the Surgeon-General, Netley Hospital he then commanded the 2nd Station Hospital, Aldershot 1893-95. He was posted to Hong Kong, 1895-97, he was promoted Lieutenant-Colonel before retiring in September 1897. Upon the outbreak of the Boer War he re-joined the Army and was posted in command of the Connaught Hospital, Aldershot, where he cared for hundreds of the casualties from South Africa. He continued to serve whilst suffering from a cancer of the  throat. Caring for his final patient on 14 May 1900, he travelled to London and died on 19 May 1900. Hayes is buried in the Aldershot Military Cemetery.

‘Lt. Col. Hayes was a born solider and was devoted to the Army and to his profession. He was an able Surgeon, as already mentioned, an accomplished musician and an Oriental scholar. He had a fine physique and a handsome presence and there were few men more full of wit, gaiety and vivicity. His courage on the field of battle met with public acknowledgment, but it was not greater than the fortitude with which he concealed from those around him the nature of his last illness.’