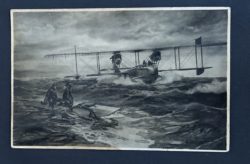 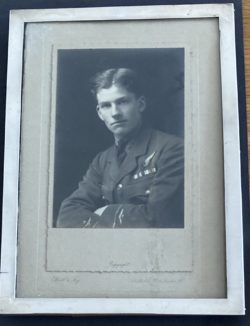 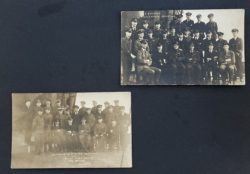 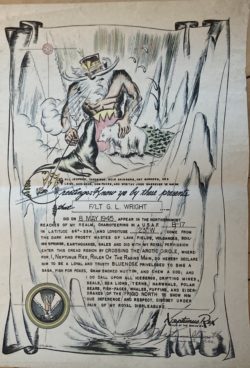 Distinguished Service Medal and MID (White Sea) group AM2 RNAS, with superb original documents and photos, both award for anti submarine patrols, who survived being lost at sea for six days in May 1917 kept afloat by a seaplane float. Later commissioned 2.Lieut. and WW2 as Squadron Leader.

A hallmarked silver framed portrait photo of Wright in about 1919,

Portrait photo of Wright during WW2,

Letter from the Admiralty to his parents dated 26th May 1917 reporting him missing.

Newspaper cutting relating him being lost at sea for six days

Imperial War Museum illustration depicting him and his pilot being rescued after six days at sea,

R.N.A.S. Magazine ‘The Wing’ which includes an article about him being lost at sea for six days,

George Leslie Wright was born at Leicester on 27th October 1898.

On the 24th May 1917, Air Mechanic 2nd Grade Wright was flying as Observer, with Sub Lt. H.M. Morris, in a seaplane over the North Sea on patrol duties and submarine searching, when their plane crashed into the water. For six days, with little to eat, they held on to one of the plane landing floats that fortunately survived the crash. Part of a newspaper article describes their ordeal:
“There was also the danger of going to sleep, and we could not do that. When we had been hanging on to the float about five or six hours I said to Wright, ‘I think I could do with a square meal.’ His teeth were chattering with the cold, and it took him quite a long time to say ‘Same here.’ Then he said, ‘I believe I’ve got something in my pocket.’ He brought out a waterproof envelope full of milk tablets. There were twelve altogether and we decided to have one a day each.”
“I think it was on the third night we heard a squadron of German airplanes returning from a raid. One of them circled round us and fired a Verey light and then flew on to join his companions. In any case we did not expect any help from them, for if they had landed in the dark, it is ten to one they would have hit one of the mines clustered about us.”
“But on the sixth day we were just about finished. Our tablets were finished and I was having a rotten time with swollen limbs, through swimming round the float for exercise. We were both at the last gasp and could hardly find the strength to cling to the ‘raft’. When the seaplane containing Flight Commander Lindsay Gordon and Flight Lieutenant G. Hodgson arrived on the morning of May 29 we could scarcely believe it. But when we were understood that it was a rescue, we both gave in and fainted.”

From ‘The Spider Web’ by Squadron Leader T.D. Hallam, (Flying-Boat Flight in the First World War’ and available as a reprint.)

Seas bursting over the lower planes were whirled up into the propellers and thrown back over the engines. They were white with the salt; but they kept running.
The tail was nearly full of water from a big leak, but a bulkhead held it out of the main body of the boat, although she was getting heavier and heavier, and was crashing through the seas instead of riding over the top of them. The sledge-hammer blows shook the whole structure.
Without its float the starboard wing-tip buried itself deep in the water each time the boat rolled, pulling itself out again with a shuddering wrench, which each time threatened to pull off the wing.
The two rescued men lay on the slatted deck of the boat and were given sips of brandy from time to time, and finally a little cocoa from the thermos flask.
So, gamely, the boat won on towards England.
Four hours after landing outside Gordon passed out of the fog belt and saw the Shipwash light-vessel, rolling and pitching, three miles north of him. It was a welcome sight. He was only a mile off his course. He had travelled on the surface a distance of twenty-two sea miles – a not inconsiderable feat of seamanship and navigation in a fog, with the wind that was blowing, the sea that was running, and the condition of the boat.
Here they were in the shipping channel. They saw vessels. Very’s lights were fixed as distress signals, and a cargo-boat, the Orient of Leith, bound for Yarmouth, saw them, came alongside, passed a line and took them in tow. Half an hour later they were under the shelter of the land and two armed drifters came alongside. The tow was transferred to H.M.S. Maratina, and Morris and AM2GR George Wright were taken on board H.M.S. White Lilac, in order to get them ashore quickly for medical attention.
Gordon stood by his boat, which was now standing up on her tail, and she was brought safely into harbour, was repaired, and carried out many more patrols, being used, after she had done thirty-nine patrols in all, for school work.
Within two months Morris and Wright, unbroken by their experiences, were again flying.”

The Admiralty wrote telegrams to Wright’s parents, dated 26th May saying that he was missing and again on 30th May saying he was rescued and was in R.N. Sick quarters, Felixstowe. His condition is stated to give rise to anxiety.
Air Mechanic 2nd Grade Wright was awarded the Distinguished Service Medal in the London Gazette dated 1st October 1917. Whilst.not specific the award was most likely  for his actions while adrift in the North Sea.
He was appointed Probationary Observer Officer (permanent) on H.M.S. Daedalus, the RNAS seaplane training school on Lee-on-Solent on 10th November 1917. He moved to H.M.A.S. Eastchurch as Observer Sub Lt. on 22nd March 1918. When the R.N.A.S. and R.F.C. amalgamated to form the R.A.F. on 1st April 1918 he was appointed Lieutenant. He also served on H.M.S. Argus, the first ever Aircraft Carrier, towards the end of the war (see postcard photo dated 24th November 1918).
Lieutenant Wright was also Mentioned in Dispatches for distinguished service in war areas in the London Gazette, 1st January 1919.
He relinquished his R.A.F. commission on 1st September 1921.
Wright was commissioned as a Pilot Officer on 4th July 1939 in the R.A.F.V.R. There is no detail of his WW2 service although he was in Iceland for at least 3 months, and was ultimately promoted to Acting Squadron Leader.
He died at Thanet, Kent, in March 1981, aged 82.