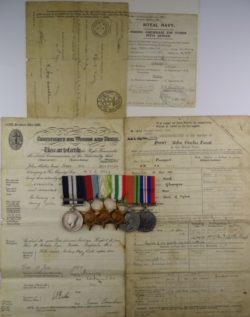 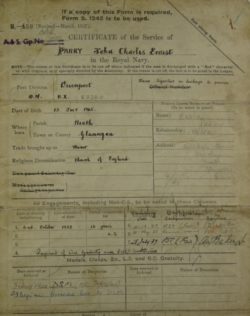 Distinguished Service Medal, (GVI)., with Second Award Bar ( Sto. 1, R.N.); a superb group for MTB’s. The DSM for MTB.69, for the withdrawal of troops from Le Havre, June, 1940 where he was wounded by a bullet but remained at his post until ordered to leave, and the bar for MTB.32 for outstanding courage when the craft was severely damaged during enemy action. Original documents including Service Record which states he received no less than 4 wound stripes

A couple of minor edge nicks. Mounted as worn

Records suggest that only three men of Coastal Forces ever received the D.S.M. and Bar for services in M.T.Bs and M.G.Bs in home waters in the 1939-45 War.

‘For courage and resource in the withdrawal of troops from the neighbourhood of Le Havre.’

‘This Stoker, although wounded, refused to leave the engine room until eventually he was ordered aboard H.M.S. Gardenia for medical treatment. This rating contributed largely in keeping the engines running and his conduct throughout was magnificent.’

‘For enterprise and coolness in action against enemy E-Boats and Armed Trawlers off the Dutch Coast in H.M. Torpedo Boats and Motor Gun Boats.’

‘When M.T.B. 32 was about to start main engines to deliver a torpedo attack, the spare cordite impulse charges were ignited by enemy fire and burnt through the upper deck into the engine room, making the engine room untenable. These engine room ratings working as a team, returned immediately to start engines. While below, the engine room was hit four times and both wing engines damaged, and the cooling water system punctured. The starboard and centre engines stopped and five minutes later the port engine caught fire. They extinguished this and using the smoke helmet in turn succeeded in starting the engine, and kept it cool by using the salt water hose and joining it up to the cooling system. By their united efforts they kept M.T.B. 32 running and enabled her to reach harbour in safety. A very gallant and resourceful team.’

John Charles Ernest Parry, born in Neath, Glamorgan,  July 1915, and entered the Royal Navy as a Stoker 2nd Class in October 1933. He joined the Coastal Forces base Hornet at Gosport in April 1940 as Sto. 1 CL., Awarded first D.S.M., namely for his gallantry in M.T.B. 69 on 12 June 1940 during operation “Cycle”, the evacuation of Allied troops from Le Havre – Captain Tower, R.N., was aboard 69 at the time, and it was he who submitted the recommendation: as stated by the S.N.O., ‘enemy machine-guns and batteries commanded the beaches and seaward approaches many hours before the evacuation was timed to commence’,

Parry remained actively employed in Coastal Forces until July 1943, operating in M.T.Bs out of Beehive at Felixstowe and Attack at Portland, and it was for an action in M.T.B. 32, against enemy armed trawlers and a merchantman off the Dutch Coast on the night of 28-29 July 1942 that he was awarded his second D.S.M. His skipper, Lieutenant D. G. H. “Jake” Wright, R.N.V.R., reported.

‘Main engines were cut at 0041 and the enemy force, consisting of two armed trawlers and a merchantman of some 1000 tons, was clearly seen proceeding in a S.W. direction – range approximately 800 yards. At 0043, the merchantman having been selected as the target, the order to fire was given. At this moment a shell struck the bridge, exploding within a foot of the Coxswain, who, before collapsing, pushed forward both firing levers, thereby firing both torpedoes at the same target.

The order to crash start was given. But meanwhile, the engine room had received direct hits with explosive shell, another shell hitting the impulse charge box and igniting a spare charge which exploded downwards into the engine room. It was therefore a few minutes before all the three mains were running. During this time, the enemy fire was returned with .5 armament; secondary armament being out of action, but almost immediately silenced by three direct hits with shell.

At 0048 main engine was running. A retiring course of N. 40 W. was set to steer by use of hand tiller, the hydraulic system having been punctured. It was seen at this time that one enemy vessel had turned over and was sinking, and that another was on fire. E/R Boats hitherto unseen were observed half a mile astern, but were either out-distanced or called off the chase after 10 or 15 minutes. E/R Boat gunfire was not accurate.
At 0110 the starboard main engine stopped and at 0115 the port main engine caught fire. All engines were stopped and the fire extinguished. The remaining engine, the centre, was again started at 0118, being operated and maintained in a running condition by an engine room rating wearing breathing apparatus. This engine although damaged in the cooling system was kept running by continually topping-up the reserve cooling tank with the deck hose operated by the port auxiliary. We were thus able to reach harbour under our own power at 0855.’

In addition to Parry’s Bar to his D.S.M., three other members of 32’s crew also received D.S.Ms, and their skipper, Lieutenant Wright, the D.S.C. – to which he would add two Bars before the War’s end

Parry’s Certificate for for Wounds and Hurts records ‘ Evacuation at Le Havre was wounded on 12th June 1940 by sustaininga gunshot wound right shoulder, enemy action’.  Also ‘Wound was received during action by enemy shore batteries, Stoker Parry being at his post in the engine room at the time.’

His service record states that in addition to his initial wound certificate he had received by 12 April 1944: 1st, 2nd, 3rd & 4th Wound Stripes (Gold).’

By this stage of the War – having left Coastal Forces in July 1943 and served in the Mediterranean – Parry was an Acting Stoker Petty Officer at the Devonport base Drake. And his final appointment, prior to being demobilised in February 1946, was in Eaglet, the Liverpool base.

Sold with the following original documentation:

1) The recipient’s Certificate of Service;
2) Certificate for Wounds and Hurts, dated 17 June 1940, and confirming his gunshot wound in the right shoulder ‘received during action by enemy shore batteries, Stoker Parry being at his post in the engine room at the time’;
3) Admiralty Gratuity Certificate for £40 for his D.S.M. & Bar, dated 17 May 1946; 4) Passing Certificate for Stoker Petty Officer, dated 2 December 1942.