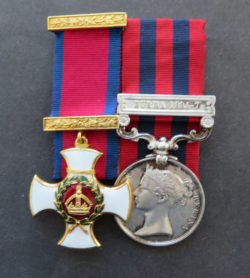 reverse of top bar with pin removed to facilitate mounting.

A unique award to the Royal Indian Marine

As effective commodore or sailing master of the fleet of

Three Officers of the Royal Indian Marine were recommended for  reward for their services during the Burma Campaign 1885-87. two being promoted in rank and  one, Captain Alexander Campbell, received his decoration