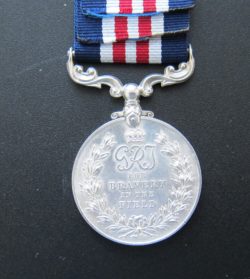 One of 24 awards to the Greek Army

L.G. 28/4/1945 Recommendation states ‘On 14 Sep 99, ‘B’ Company of the Greek Mountain Bn. was attacking Monaldini. Sgt-Major Apostolos Karagiozidis was a section commander of 5 platoon.  The attack  was made against heavy shelling and mortar fire as well as MG and small arms fire. Sgt-Major Karagiozidis directed his section to a house well defended by the enemy and during the close quarter fighting that followed, was seriously wounded in the lower abdomen. Refusing to be evacuated, he remained in his position and directed the fire of his men until the objective was captured.’