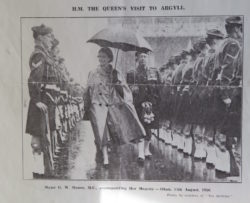 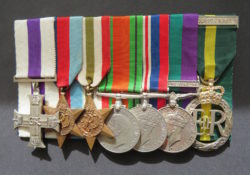 Product added! Browse Wishlist
The product is already in the wishlist! Browse Wishlist
SKU: A8171 Category: Awards For Gallantry And Distinguished Service
M.C, (GVI). reverse  dated 1944, 1939-45 Star, Italy Star, Defence Medal, War Medals, G.S.M.  clasp, Palestine 1945-48 (Capt. G. W. Munro. M.C. B.W.), Efficiency Decoration, (EII.R.), dated 1963, Territorial top bar,
M.C. London Gazette 23/3/1944:
‘In recognition of gallant and distinguished services in Italy.’
Recommendation states: ‘On the night 20/21 November 1943 at the Sangro River near Paglieta, 2/Lt Munro was in command of No 7 Platoon of ‘R’ Coy which was engaged in an operation with another Company; the task of this force being to cross the River Sangro and destroy a strongly defended enemy outpost 1000 yards to the North of the River.
2/Lt Munro commanded 7 Platoon throughout this operation and by unfailing good spirits and splendid example kept his platoon in first class fighting condition the whole time. In particular he led a patrol against the enemy post on the left which was very strongly held, and though knocked out by the blast from a grenade, brought his patrol back having pinpointed the position and killed one German with his Tommy Gun. Soon afterwards, though still suffering from shock he joined in with a patrol which captured the enemy position on the right of the company. When the company moved over the top of the escarpment, 7 Platoon occupied an isolated position out in front of the Battalion line, and later when the Battalion moved up and occupied Santa Maria, 2/Lt Munro led a successful daylight patrol through difficult country.’
T.D. L.G. 9/7/1963.
Gordon Wallace Munro, Commissioned in the Black Watch , April 1943, Attached 8th Battalion Argyll and Sutherland Highlanders in Italy, October of that year, and was awarded an Immediate Military Cross for his gallantry at the Sangro River during the night of 20-21 November 1943. Wounded at Sangro River on 5 February 1945, upon recovering from his wounds he was posted to the 1st Battalion, Argyll and Sutherland Highlanders in July 1945.  Captain on 15 May 1951, and Major on 27 June 1954, he was awarded the Efficiency Decoration in 1963, retired 1964 as Second in Command of the Battalion.