‘For conspicuous gallantry and good leadership. He led his company with great dash in the face of heavy machine-gun fire, taking many of the enemy prisoners and capturing five machine guns. On the following day he consolidated and held a position with a mixed body of troops, with a few officers and N.C.Os., going out alone on several occasions to bring in his wounded. Throughout the operations his courage and bold leadership inspired his men with the greatest confidence.’

‘For conspicuous gallantry as acting adjutant during the attack on Bois d’en Haut, near Maricourt, on August 27th, 1918. He immediately volunteered on arrival of battalion at final objective to go forward under heavy fire and clear up the situation, and personally visited all the posts of the battalion 1,500 yard front in doing so. He collected various scattered parties and placed them in positions where there were gaps. During this critical consolidation he set a splendid example to all the posts that he visited by his utter disregard of danger.’ 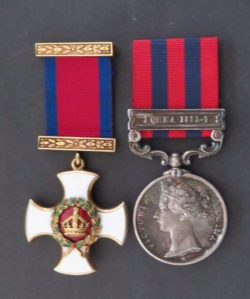