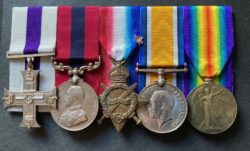 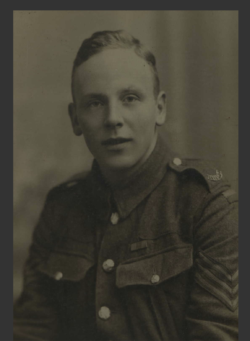 Add to Wishlist
SKU: A9012 Category: Awards For Gallantry And Distinguished Service

‘For conspicuous gallantry during an attack. He led his platoon with great dash against strong enemy machine-gun positions which were checking the advance. Later, when new positions were strongly attacked by the enemy, he held on to his posts and prevented them from reaching a single point in the line. He also assumed command of another company which had lost its officers and handled them with skill. Throughout he showed fine leadership and devotion to duty.’

‘For conspicuous gallantry in action. He defended his bomb stop successfully against repeated enemy attacks. He displayed great courage and determination throughout and has previously done fine work.’

Thomas Graeme Stewart served in France as a Private in the 7th Battalion, East Kent Regiment (The Buffs) from 28 July 1915, and had been promoted to Sergeant by the time he won the D.C.M. on the Somme in 1916.

On 28 September, 18th Division continued their attack with their objective this time being the the formidable German stronghold, the Schwaben Redoubt, one thousand yards north of Thiepval. 53 and 54 Brigades met stubborn resistance here and only managed to capture its western and south-western faces. By this time 7th Buffs had moved up to Crucifix Corner and on the last day of the month they were ordered to standby after an SOS call from the Schwaben Redoubt where the enemy had suddenly counter-attacked, driven the defenders back from the southern face and captured the whole of the western face. Two platoons of 7th Buffs were sent forward to assist but the fire from the Germans was so fierce that they were immediately hit hard and could make no progress up the western face. That evening the rest of the battalion relieved a very weak 8th East Surrey in both Thiepval and those parts of the redoubt that had been captured. By the early morning of 1st October this relief was complete. 7th Buffs now held part of the northern and southern faces of the redoubt while 7th Royal West Kent held the land down to the Ancre. The situation in the redoubt was very chaotic with different units intermingled and all engaged in a fierce struggle involving close quarter, hand to hand fighting. This lasted until 5th October on which day, 7th Buffs were relieved having suffered over two hundred casualties.

Stewart was discharged to a commission on 29 May 1917, being appointed 2nd Lieutenant in the Plymouth Division of the Royal Marines on the following day and was appointed Temporary Lieutenant on 30 May 1918. He joined the 1st Royal Marine Battalion in France in April 1918 and won his Military Cross during the Second Battle of Bapaume in the attack on Le Barque on 25 August 1918. He was appointed Acting Captain on 9 September 1918, and was demobilised in April 1919.

With  gazette notices, Medal Index Card, D.C.M. card and various extracts from war diaries and regimental histories and a photograhic image as NCO