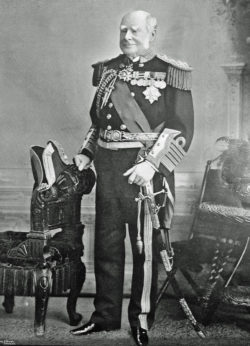 Admiral of the Fleet The Honourable Sir Henry Keppel, G.C.B., O.M. Captain of the Dido in the First China War and of the Dido with ‘Rajah’ James Brooke in the Singapore and Malacca Straights in the supression of piracy. Commanded the Royal Naval Brigade at the siege and fall of Sebastopol, commanded the British Squadron at the destruction of 70-100 of the Chinese war junks at the Battle of Fatshan Creek.

Admiral Of The Fleet The Honourable Sir Henry Keppel (1809 -1904) , b.1809 at Earl’s Court, London, the fourth son of William Charles Keppel, the fourth Earl of Albermarle, and the Honourable Elizabeth Keppel (née Southwell), daughter of Edward Southwell, the twentieth Lord Clifford. The Keppel’s were a powerful aristocratic family originally of Dutch stock, and Sir Henry Keppel’s ancestor Arnold Joost van Keppel, 1st Earl of Albemarle had been a favourite of William of Orange (later King William III of England), and was present with him when he arrived in Britain in 1688.

Joined the Royal Navy in February 1822 aged 12, served aboard H.M.S. Tweed as a Midshipman 1824,  to Lieutenant at the age of 19, promoted to Commander, in 1834. Took command of the brig Childers along the south coast of Spain during the Carlist War.  He attended Queen Victoria’s coronation on 28 June 1837, and was made Captain in December that year. He volunteered for command of the corvette H.M.S. Dido (which he later considered his favourite ship) which he sailed to China in 1841 to serve with distinction under the command of Sir William Parker during the latter part of the First China War, taking part in the capture of the forts at Shanghai and the capture of Chiang Kiang Fu. During this time the Dido took part in the searching of many junks, and on one encounter he fell from the junk across the gunwale of his boat, and damaged his spine causing a complaint which would quietly trouble him throughout his life. In 1842/3 he was sent to serve as senior officer at the Singapore & Malacca Straits station, where he formed a firm friendship with ‘Rajah’ James Brooke, who he carried back to Sarawak aboard Dido. Upon meeting him, James Brooke wrote in his diary: “He seems to be just the man for the work; for, with plenty of dash, his manners are so conciliatory towards the natives as quite to win their hearts.” In the year and a half which followed, Keppel and his crew worked tirelessly in the pursuit and suppression of the widespread and brutal piracy taking place in the waters around Borneo, as recorded in his memoir Expedition to Borneo of H.M.S. “Dido” for the Suppression of Piracy’ (1846). Between 1848 and 1850 he sailed the Maeander on an exploratory expedition around the Indian Archipelago, taking in much of Borneo, the Phillipines, Java, Timor and Papua/New Guinea, before returning to Britain via Australia and Cape Horn.

The ‘History of Piracy’ records ‘The homes of the two principal pirate tribes were on the banks of the Sarebas and Sakarrran rivers. It was to the Sarebas pirates, well armed, made up of several thousand Malays and Dyaks, that Brooke first turned his attention and in comany. In 1843, in company with Captain the Hon. Henry Keppel, commanding H.M.S. Dido. and with a mixed squadron of Europeans and malays following, he sailed up the pirate river, attacking  and destroying every pirate fort and settlement he found.’

Commanding H.M.S. Rodney he took command of the Naval Brigade at Sebastopol. Here the naval guns were put to immediate effect in besieging the fortified positions of the enemy, and Commander Keppel was widely recognised for his excellent work. Sir Algernon West wrote in his Memoir that: “Throughout his command of the Naval Brigade, which contributed so largely to the downfall of Sebastopol, Keppel exhibited a cool courage which, even among courageous men, was remarkable. A perhaps too reckless exposure of himself was redeemed by the inspiring audacity of his presence at all times and in all places.” (Turkish and French awards, and C.B  1856).

In late 1856 Commodore Keppel took command of the newly fitted H.M.S. Raleigh, and it was in this vessel that he took up the position of Second in Command of the China Station. Whilst en route  and just 50 miles from her destination, the Raleigh struck a sharp, conical group of uncharted rocks on 14 April 1857, caving in her bow. Heroic attempts were made at the pumps allowing her to limp into Macao, where Portuguese vessels were sent to her assistance. Sadly nothing could be done to save her except to safely remove her crew and some of the cargo. Continuing regardless onward to Hong Kong, Commodore Keppel played a key role during the Second China War  in the operations in and around the Canton River now aboard his new vessel, the chartered river steamer Hong Kong. Keppel himself was entrusted by his Commanding Officer Sir Michael Seymour to lead the attack upon the Chinese Fleet which had assembled at Fatshan Creek. The Chinese war junks were well situated to receive their attackers, with guns ready and distances carefully measured out in the face of a direct three mile approach.

“Sir Michael Seymour’s flag was flying on board the Coromandel, tender to the flag ship; a party of marines who were told off to carry a fort at the entrance of the creek were also on board this vessel. Besides the Coromandel, we had the Haughty and Plover gunboats, the hired steamers Hong Kong and Sir Charles Forbes, and all the available boats of the squadron. The enemy’s force consisted of one hundred heavily armed junks, the pride of the imperial navy. Eighty of these were moored some three miles from the mouth of the creek, commanding an almost impregnable position, their broadsides bearing on the only direction from which they could be attacked; the remaining twenty were moored about four miles farther up the creek, with their guns concentrated on a narrow passage and a bar, which the boats would have to cross to get at them. The junks presented a picturesque and formidable appearance, with ban ners and streamers flying, guns run out on one side, and boarding nettings triced up ready to drop on us when we got alongside, so as to spear us when entangled in the meshes. All had stink pots at the mast heads, and it was evident that they were pre pared to give us a warm reception, and were confident of success.”
Despite meeting fierce resistance and suffering considerable casualties, the British victory was decisive. Keppel with his gunboats and small galleys in tow approached the awaiting ships, but 400 yards from their target Keppel’s vessel and others became beached upon a mud bank, presenting clear targets which were soon showered with grapeshot and cannonballs. Keppel’s leading galley was sunk, with 5 of his 6 crew killed or wounded, but escaping with his remaining men to a boat from the Calcutta, they regrouped and then pressed ahead with their attack, coming alongside the Chinese vessels, boarding them, spiking guns and setting them on fire as the Chinese defenders fled in retreat. All in all, Keppel and his gunboats saw to it that only a handful of the c.70 – 100 Chinese war junks escaped. Casualties amongst the gunboats were considerable (13 killed and 44 wounded), and furthermore, marines landed for an attack upon a fort nearby also suffered heavily too, but overall the attack was considered a vital success, and it would later be immortalised in the Illustrated Times engraving ‘Commodore Keppel’s dash at the Junks in Fatshan Creek’ published that same year (see illustration). Keppel also took part in the subsequent capture of nearby Canton (near modern Guangzhou), (awarded K.C.B.)

Keppel’s  was soon after tried by court martial for the loss of the Raleigh, however Keppel was acquitted of all blame.

He was promoted to Rear Admiral and instructed to return to England on half pay. He was given the post of ‘Groom in Waiting’ to the Queen, but the following year he had no choice but to resign upon his appointment as Commander in Chief at the Cape of Good Hope. As a result of a rumoured affair on his outward voyage aboard H.M.S. Forte between Keppel and the wife of the Governor of Cape Colony  he was transferred to the South American Command. He was made Vice Admiral on 1 Just 1864, and between 1867 and 1869 he was made Commander in Chief in China. Promoted to full Admiral on 3 July 1869, he was made G.C.B. in 1871 and was made Commander in Chief at Devonport between 1872 and 1875. He was promoted to Admiral of the Fleet in  August 1875. He was appointed as Naval Aide de Camp to Queen Victoria who called Keppel her ‘beloved little Admiral’.  In June 1878,  he was placed on the retired list.

Sir Henry Keppel made one final journey to Singapore, and on 19 April that year the so called ‘New Harbour’ near Sentosa (which Keppel had reputedly discovered many years before) was renamed ‘Keppel Harbour’ in his honour by the Acting Governor Sir Alexander Swettenham, with nearby ‘New Harbour Road’ becoming ‘Keppel Road’. Sir Henry Keppel was made one of the first members of the Order of Merit upon its institution in 1902, and despite his advancing years (now aged 93) he attended the banquet at the Athenaeum in July that year. Sir Henry Keppel was married twice, firstly to Katherine Louisa Crosbie, the daughter of General Sir John Crosbie, in 1839, and secondly to Jane Elizabeth West, by whom he had a son Colin E Keppel, who would also go on to serve with distinction in the Royal Navy, earning a D.S.O for commanding the Nile Gunboat Flotilla in the Sudan Campaign.
Sir Henry Keppel died in his sleep at his London residence of Albany Chambers on 17 January 1904, at the age of 95, having had a luncheon with his close friend King Edward VII at Buckingham Palace just a few weeks before.

With research, including copied biographical details as printed in his full obituary in The Times, a hardback copy of his biography: ‘The Beloved Little Admiral: The Life and Times of Admiral the Hon. Sir Henry Keppel, G.C.B. O.M. D.C.L., 1809 1904’ (1967), by Vivian Stuart and a reprint of Expedition to Borneo of H.M.S. “Dido” for the Suppression of Piracy’ (1846).

An exceptionally rare opportunity to acquire a Military Order of Merit. Approximately 30 awards of the Military Division of all reigns were awarded including six foreign holders. Several are known in museums. A  roll call of those awarded illustrate the unlikelihood of  purchase. Naval awards include Jellicoe, Beatty, Fisher and Mountbatten, Army awards  to  Roberts, Wolsely, Kitchener, French, Allenbrooke, Alexander of Tunis, White, V.C. RAF awards were to Trenchard, Hungerford & Newall. The foreign awards being, French Generals Foch and Joffre, 2 princes of the Japanese Imperial family together with Admiral Togo, one of Japans greatest naval heroes together along with Dwight D. Eisenhower. 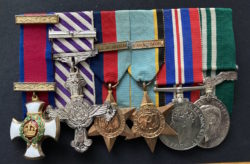 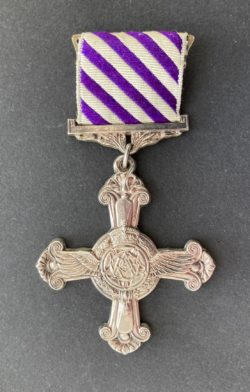