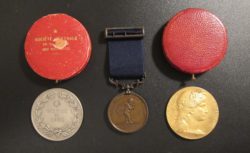 Served with the Bibby Line of Liverpool, and afterwards  Hunting & Son of Newcastle, three times decorated for lifesaving.  Firstly 2  French awards – Lloyd’s agent at Rouen reporting that they were in respect of his ship, the Oilfield, picking up two members of the French fishing schooner La Normande, found adrift in a dory mid-ocean on 21 August 1908. Two of his ratings received the Rouen Chamber of Commerce in bronze.

His subsequent award of the Royal Humane Society’s Medal in bronze was in respect of rescuing a passenger from his ship the S.S. Bloomfield at midnight on 22 May 1913, at Galveston, Texas – ‘The man fell into the harbour when going ashore from the Bloomfield, the water being foul with oil. Salvor jumped in and held him for ten minutes when a rope was got and he was pulled out’. Society records add that O’Neill was then 64 years of age.

Remaining in command of the Bloomfield until June 1917, O’Neill died at Cape Town, South Africa,  1918; sold with