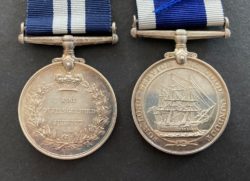 Submariner Distinguished Service Medal group, Petty Officer R.N. H.M.S. Sportsman. Engaged in war patrols in the Med. 1943-early 1944 sinking various German vessels including rather controversially the German S.S.Petronella. Despite clearly marked as a P.o.W ship and carrying Italian prisoners following the ceasing of Italian hostilities and resulted in the loss of 2670 of the 3173 Italians mostly caused by German guards keeping the holds barred at gunpoint

H.M.S Sportsman was a third-batch S-class submarine built for the Royal Navy during World War II. Completed in December 1942, she spent most of the war serving in the Mediterranean Sea. After an initial patrol off Norway, she sank the heavy transport Général Bonaparte in the Mediterranean in 1943 and missed a French oil tanker. She was heavily damaged after a mistaken attack by an Allied bomber, and was sent east after repairs to participate in operations in the Black Sea. After the operation was cancelled, Sportsman patrolled the Aegean Sea, sending several Greek and German ships to the bottom. She sank the German transport SS Petrella in early 1944 despite it being clearly marked as a prisoner-of-war ship, killing 2,670 out of 3,173 Italians aboard. Sportsman sank several more ships, and suffered minor damage when she was detected and sighted while attempting to attack a convoy.
After a refit in the United States, she returned to the United Kingdom where she participated in additional training for operations in the Far East. The deployment was cancelled when the war in the Pacific ended in 1945, and Sportsman was placed in reserve at Harwich.

Sinking of the Petrella

Crete had been captured by the Germans in May/June 1941, and was occupied by a mixed German-Italian force as “Fortress Crete”. The Italian 51st Infantry Division Siena consisted of some 21,700 men, and occupied the easternmost prefecture of Lasithi. Following the armistice of September 1943 the Italians in Crete were disarmed by the Germans without major problems. As elsewhere, they were given the choice to continue the war alongside Germany, or to be sent to the Reich as military internees to perform forced labour. A minority chose to continue the fight and formed the Legione Italiana Volontari Creta.

As ordered by Adolf Hitler, the Italian internees were transported back to Germany. On 8 February 1944, some 3,173 prisoners were crammed into the hull of the Petrella. The ship was detected by the Royal Navy submarine HMS Sportsman and torpedoed, despite the Petrella having been clearly marked as a prisoner of war transport. Some 2,670 prisoners died when the ship sank; a factor in the high death toll was that the guards did not open the holds where the POWs were and fired on those trying to get out.