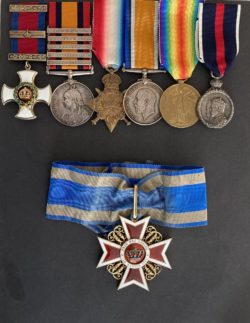 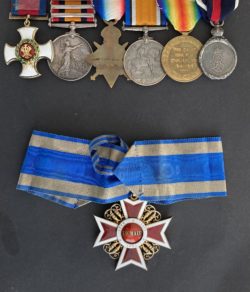 Victorian D.S.O. with bar for the Great War 6th Iniskilling Dragoons and commanding 6th Dragoons in the Great War and later 6th Cavalry Brigade, both fine action awards. Having in the action at Lake Chrissie, October 1900 found himself riding alongside Commandant Smuts though by then shot through the thigh and unfortunately unarmed. Bar commanding his cavalry brigade in the line at the desperate rearguard action at St. Quentin 22-23 March, 1918

Ewing Paterson
Mentioned in despatches (LG 10 Sept. 1901) Created Distinguished Service Order L.G. 27/91901) The Insignia were presented by the King on 29 Oct. 1901.
For various acts of gallantry (see below), extensively expanded upon in O’Moore, Creagh and Humphris in “The Distinguished Service Order 1886-1923” devote almost a full page to Ewing Paterson, and they quote from the Yardley (C.O. 6th Dragoons).

“For conspicuous gallantry and devotion to duty. Owing to the neighbouring troops being driven back, his flank became exposed and a gap was made in the line. Though he had very few men, he at once extended his flank and maintained a most gallant and determined resistance for an hour against largely superior numbers, closing the gap at a most critical moment until other troops were able to advance and restore the line. His tactical handling of the brigade during successive withdrawals, often with one or both flanks exposed, was magnificent.”

Regarding his Boer War service O’Moore, Creagh and Humphris in “The Distinguished Service Order 1886-1923 records Yardley –

“On 27th Feb. 1900 ‘B’ Squadron under Lieut. Paterson reconnoitred Rensburg. Finding it weakly held, they seized the position commanding it, drove off the Boer rearguard, and took the town – a very smart performance.”

During the fighting in March 1900

On 20 March – Yardley “B Squadron under Lieut. Paterson took part in General Clement’s march to Bloemfontein, General French boldly pushed into the Kalkheuval Pass late in the afternoon. During the fighting that ensued one of Colonel Yardley’s troops under Lieutenant Paterson “which was keeping communication between us and the 4th Brigade, found itself alone and guarding the left flank, which the 4th Brigade had abandoned. Lucky indeed that it pluckily stuck to those heights, despite being fired on by our own men, otherwise the whole division might have suffered an awful disaster.”

At Roodehoogte
“Lieut. Paterson, who was in advance on the left front did good service” … “Lieut. Paterson, with his troops galloped on to a big hill and climbed the precipitous sides just in time to forestall the enemy and drive them back giving us a commanding position…..
“It was a fine piece of dash, and fairly surprised the Boers.”

In the fight at Tevreden, near Lake Chrissie, 16 October, 1900 “Lieutenant Paterson behaved with great dash, being slightly wounded as he galloped, unfortunately unarmed, alongside Commandant Smuts himself”.

After describing the gallantry of the Inniskillings, and the heroic death of Lieutenant Swanston, Colonel Yardley states:

“Lieutenant Swanston and our other dead were buried at sunset at the foot of the Tevreden Hills, close by which I lay wounded, with Lieutenants Paterson and Harris. The sadness of it I shall never forget, with no feeling of victory to cheer the heart — only regret”. And later: “Lieutenant Paterson, shot through the thigh at Tevreden, pluckily returned to duty; but this inflamed his wound, and he was invalided home in consequence”.

During WWI he commanded the Inniskilling Dragoons in France (1915-18) and the 6th Cavalry Brigade from 2 Sept. 1918 to the end of the War, being mentioned in despatches five times. In addition, he was awarded a , p7394).
Ewing Paterson was the second son of John Paterson of Kingburn and Langraw, St. Andrews, in Fife. He was born on 8 June 1873 and was educated at St. Andrews and in Germany and joined the 3rd Militia Battalion Manchester Regiment as a Lieutenant in 1889. He transferred to the 6th Dragoons on 9 September 1893 being promoted Lieutenant on 1 January 1895. Captain 1901, Major 1905. Commanded the 6th Dragoons in France 1915-18. Commanded the 6th Cavalry Brigade in 1918 with great distinction in age German March offensive particularly at the battle of St. Quentin 22-23rd March,
He was Commandant, Cavalry School, from 1920 to 1922 and retired in 1923.

A rare combination and a stunning group. A junior officer D.S.O. and a very good clasp to a Brigadier General at the sharp end.