CWGC record all O'Rs. date of death as 26/4/1915 and officers 25/4/1915 irrespective of whether killed off the River Clyde or the following day during the push inland though CWGC records

River Clyde was beached at V Beach beneath the Sedd el Bahr castle, on the tip of the Gallipoli peninsula. The plan failed and the River Clyde, beached under the guns of the Turkish defenders, became a death trap. Three attempts to land made by companies of Munsters, Royal Dublins and Hampshires ( two companies only 'Y' and 'Z'), all ended in costly failure. Further landing attempts were abandoned and the surviving soldiers waited until nightfall before trying again. The troops were under the overall comand of Colonel Carrington Smith, Hampshires (killed).
On April 24th headquarters,Y and Z companies left Lemnos in the Alaunia for Tenedos, where they transferred to the River Clyde. The Hampshire were allotted to No.3 hold, abaft the funnel. The covering force as to make its biggest effort at V Beach. Three companies of the Dublin Fusiliers were to lead the way in 'tows', each of four boats holding about 30 men apiece and hauled by steamboats. The Munsters, the last company of the Dublin's, and the Headquarters wing of the Hampshire, with Y and Z Companies were on board a collier, the River Clyde which was to be run aground on the beach; ports had been cut in her sides to enable the men to get out quickly on to a steam hopper towed alongside her port side to provide a gangway ashore.
Shortly before midnight on April the 24th the flotilla left for the Peninsula. The River Clyde grounded 40 yards from the beach before the tows reached the beach, almost immediately a devastating fire caught the crowded boats and within a few minutes terrible losses had been inflicted, men trying to escape jumped into the water and a large amount drowned due to there heavy equipment. Commander Unwin managed to get three lighters in tow on her starboard side into position to make a bridge, giving the Munsters a chance to dash along the gangways to shore. So murderous and accurate was the fire, that only a handful achieved their purpose and the gangways were soon filled with dead and wounded. The sailor helping Commander Unwin was killed and the lighters drifted into deeper water.
A few men made it wading ashore but after 20 men were killed of N0# 9 Platoon of Y company Hampshires who attempted to get ashore, the Commanding Officer stopped any further attempts because of the useless loss of life. Meanwhile boats on the starboard side of the collier made a dash for the shore under heavy fire (15 men being hit ) these troops joined the Dublin's and Munsters sheltering along a bank under the Sedd el Bahr cliffs.
Members of River Clyde's crew maintained the bridge from the ship to the beach and recovered the wounded. For their bravery six of them were decorated with Victoria Crosses.
Ray Westlakes 'British Regiments at Gallipoli 1996' records that "W" & "X" Companies landed at "W" Beach between Cape hells and Tekke Burnu whilst "Y"  & "Z" Companies, River Clyde took very heavy casualties – many men hit while wading ashore in shoulder-deep water, most  of the wounded  drowned at 'V" Beach
Harry Bessant,  died of wounds with 14th Battalion, 14/10/1917. Previously wounded June 1917 g.s.w. left  hand and October, g.s.w. right knee. 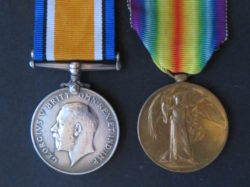 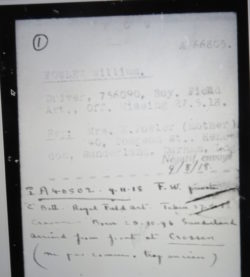 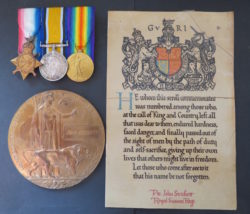 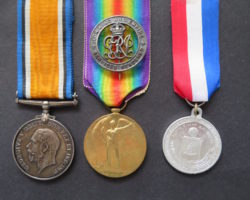 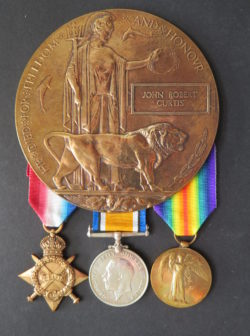