Korea pair, A ‘Glorious Glosters’ Prisoner of War Battle of Imjin River. Served “B” Company (Major Harding) which company held off wave after wave of enemy assaults on Hill 314 before those remaining joined the rest of the battalion on Gloster Hill

“B” Company was withdrawn to take position on the high ground of Hill 314 with “C” Company to their left. Daytime gave some breathing space, but now the Glosters were completely surrounded by the enemy’s 189th Division, which had taken the place of the mauled 187th. The rest of 29th Brigade Group faced the Chinese 63rd Army’s third division, the 188th, and the remnants of 187th. The assault on the Glosters recommenced with new ferocity in the late evening of the 23rd. Once again, successive waves of Chinese soldiers attacked through the night and uphill, taking heavy casualties while concentrating at first upon “B” and “C” Companies. The enemy managed to separate the two companies on Hill 314, driving “C” Company from its position around 3.30 a.m. Colonel Carne ordered an evacuation of Hill 314, and those men of “C” Company who were able made their way to Hill 235, where the Battalion would concentrate with “C” Troop 170th Mortar Battery. “B” Company continued to hold their ground, before those who could joined the rest of the Battalion on Gloster Hill later. During the night of 23/24 April, the Glosters’ B Company, outnumbered 18:1, endured six assaults, calling in artillery on their own position to break up the last of them. Low on ammunition and having taken many casualties, the seventh assault at 08:10 forced them to abandon their position, and just 20 survivors made it to Hill 235, to which battalion HQ, the Support Company and C Company had already withdrawn. 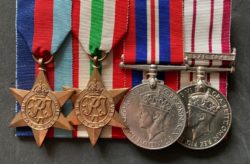 N.G.S. Yangtze 1949 group. When in Christies, November 1986 was apparently catalogued as H.M.S. London and wounded in the incident