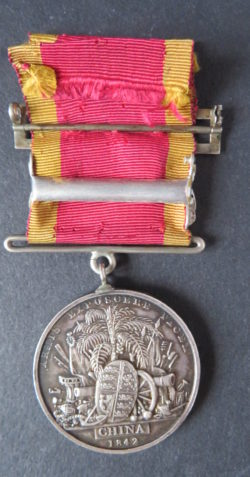 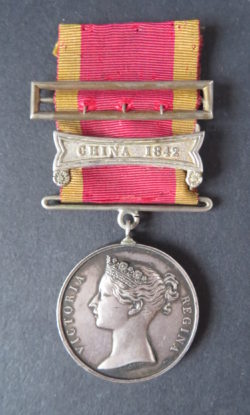 Product added! Browse Wishlist
The product is already in the wishlist! Browse Wishlist
SKU: A8591 Category: Single Campaign Medals
China 1842, 1 clasp, China 1842
John Doyle, Clerk, H.M.S. Apollo, originalribbon and wide silver ribbon buckle.
101 clasps ‘China 1842’ were issued to officers and men who served in the first and second China wars.
John Doyle passed his examination on 6 January 1841, and was appointed to H.M.S. Apollo, in which ship he served during the campaign in China, at the storming and capture of Chin Keang Foo in July 1842. He was promoted Paymaster on 6 March 1856, and on 12 May 1859, was appointed to H.M.S. Cambrian, on the East India and China Station. In Cambrian he became entitled to the second China war medal but the note on the medal roll 'Has the Medal for 1842' indicates that he would have received just the clasp 'China 1842' to add to his earlier medal. Confirmed on the roll of recipients for the clasp 'China 1842' in Naval Medals 1793-1856, by Captain K. J. Douglas-Morris.