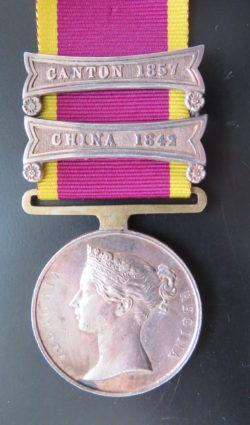 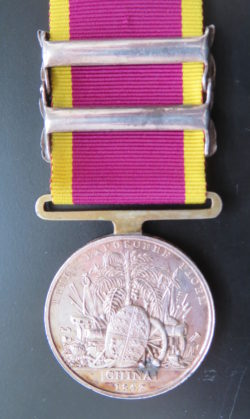 clasps loose upon ribbon as issued

101 ‘China 1842’ clasps issued to participants of the First and Second Opium War and  approx 39 entitled to the ‘Canton 1857’ clasp in addition.

Wellesley was commanded by Commodore J. J. G. Bremer and captured Chusan after an exchange of gunfire with shore batteries  with some 27 cannonballs were found in her hull after the exchange.

On 7 January 1841 she participated in the Second Battle of Chuenpee and the bombardment of fortifications at Tycocktow. Both Chuenpee and Tycocktow guarded the seaward approaches to Canton on the Bogue.  Wellesley  then was engaged in the Battle of the Bogue, which involved bombardments, and  landings resulting in the capture and destruction of nearly all the Chinese forts on both sides of the Bocca Tigris up to Canton. Seamen and Royal Marines attacked and captured the fort, camp and guns at a Chinese position during the Battle of First Bar. The Squadron also destroyed the Chinese Admiral’s ship Cambridge, formerly a 34-gun East Indiamen.

From 23-30 May, she participated in  operations in the capture of Canton and on 26 August Wellesley participated in the destruction of batteries and defences surrounding Amoy being at one point  within 400 yards of the principal battery. This action included the temporary occupation of that town and island, along with its key defensive positions on the Island of Koo-Lang-Soo, which were garrisoned. Lastly, on 1 October the British, who had withdrawn in February, reoccupied Chusan and the city of Tinghae. The British proceeded to capture Amoy, Ningpo, Woosung, and Shanghai, ending with the seizure of Chinkiang and closing the entrance to the Grand Canal on 21 July 1842.

James Lucks, b. Devonport, 1816, entered the Navy aboard Wellesley in 1837 as Carpenter’s Crew. In 1846 he was appointed to warrant commission as 3rd. Cl. Carpenter and 2nd Cl. aboard the Esk in 1856 in which he served at Canton 1857 and 1st Class, 20/5/1859. He ended his career at sea aboard princess Royal 1863. Despite his record marked throughout as ‘Very Good’ or ‘Good’ and stated by the Captain of Esk as ‘Reommends’ during the period of service in China, Captain Key of Pcs. Royal marked his record with a simple ‘Not much good’! -perhaps a little jaded by this time. He spent 1863-1868 in the Naval dockyard and then retired.  He died in Stoke Damerel, Devonport, 1881.