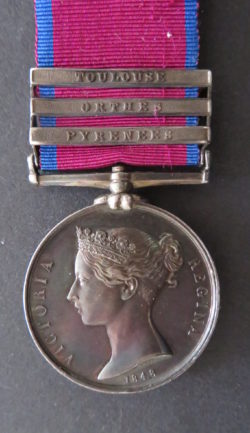 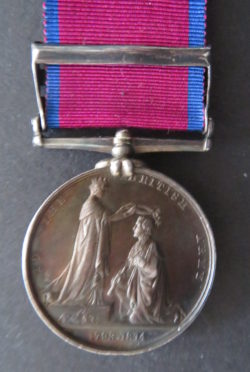 Disch. in consequence of being wounded at Platsburg, North America, gun shot to the foot, toe amputated and previously at Maya, wounded in the throat.

Only one James Smith on the medal roll and on the muster rolls.

Copy discharge papers. From Waltham Abbey, enl. 1811, served in Bt. Major Cameron’s Light Company. Wounded in the throat at Maya (presumably the Battle of Maya, Pyrenees 25/7/1813, as part of General Stewarts 2nd Division. ), and was wounded in the foot in action with the enemy , at Platzburg in the United States of America in September 1814.’ (most likely the action of the 6th at Culver’s Hill where Colonel Willington of the 3rd. was leading the advance of the British force and killed at that place.)

Upon the ‘conclusion’ of the war in Europe the 3rd were sent to North America. In September, 1814., Prevost ordered his troops to New York side of Lake Champlain towards the American position at Plattsburgh. The Navy were tasked with defeating the Americans on Lake Champlain. The 3rd as part of Manley-Powers Brigade along with those of Brisbane & Robinson sucessfully forced the Saranac River.

‘He (Major Wools, USA) met the advance of the British column under Colonel Willington of the 3rd Buffs. From this point the command of Major Wools disputed every foot of ground until it reached the right bank of the Saranac.’

“When the encountered Major Wool’s little force, they dropped their packs and charged with fixed bayonets” Colonel Willington was shot dead along with another officers and twelve men killed.

With the defeat of the British Naval ships on Lake Champlain Prevost ordered a general withdrawal. This was a decision which incensed the three brigade commanders who were  Peninsula veterans and were fully satisfied of an ability to hold  Plattsburgh with or without.  The failure at Plattsburgh ended British designs in  the USA and effectively led to the Treaty of Ghent.

James Smith was hospitalised in Quebec his statement of service was signed at La Prairie, Canada, 25/5/1814 and he was discharged unfit for further service, 3/10/1815.