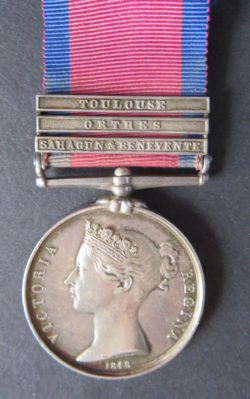 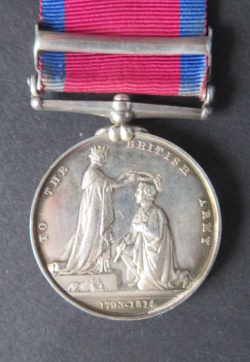 Product added! Browse Wishlist
The product is already in the wishlist! Browse Wishlist
SKU: A8562 Category: Single Campaign Medals
Military General Service, 3 clasps, Sahagun & Benevente, Orthes, Toulouse
Charles Cockrell, 7th Light Dragoons.
With copy discharge papers
Charles Cockrell (Cockerell) , s born in the Parish of Walberton, near Arundell, Sussex, and enlisted for the 7th Light Dragoons at London on 19 May 1803, aged 21, . He served 15 years 282 days, in the Peninsula and at the battle of Waterloo, and was discharged at Staines on 24 February 1819, on reduction of the regiment. His general conduct as a soldier was described as ‘Good and is hereby recommended from length of service & wound received in the neck at Benevente.’
Note with states ‘The muster roll for Waterloo (WO 12/769 and Dwelly) show his as also being wounded at Waterloo.’
no copy included for this and for information only