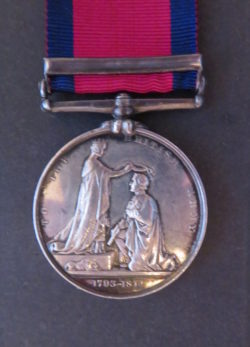 Henry Chambers Murray Cox B. Calcutta in 1789,  Bengal Army in 1805. He served with the 5th Volunteer Battalion at the capture of Java and Fort Cornelis in 1811, and with the 1/29th Bengal Infantry at the siege and capture of Hathras in 1817, and operations in Oudh in 1822. Appointed to raise and command the Bundelkhand Provisional Battalion in 1825 and eventually became Colonel of the 58th Bengal Native Infantry. Promoted to General in December 1871 and died at Burnham, Somerset,  1876, aged 87.

Roll confirms and shows only 46 MGS to the H.E.I.C