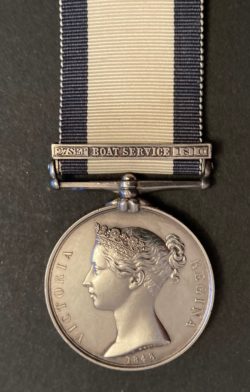 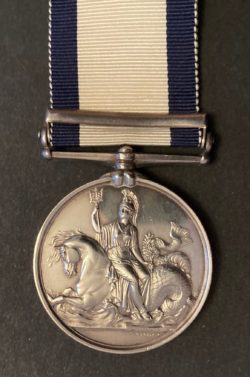 Naval General General, Boat Service 27 Sep. 1810, 1st. Lieut. R.M. A fine award for the carrying by bayonet of the battery and the spiking of the guns at Pointe du Che.

35 awarded but only 14 known extant, of which a couple of these with common names and several in institutions

Note. A medal named to  J.  Couche is stated as still held by the Naval Museum. Can’t speak for the naming or the medal but this medal is beautifully crisp and as seen from the photos is perfect and original  in every respect.

Roll confirms. Boat Service roll records also notes ‘Basque Roads’ in remarks column but it does not on the official  Basque Roads roll nor listed in Allen’s Naval List (or Message)

A fine award for the carrying by bayonet of the battery and the spiking of the guns at Pointe du Che.

On the night of the 27th of September, the boats of the 120-gun ship Caledonia, Captain Sir Harry Neale, 74-gun ship Valiant, Captain Robert Dudley Oliver, and 38-gun frigate Armide, Captain Richard Dalling Dun, lying at anchor in Basque roads, were detached under the orders of Lieutenant Arthur Philip Hamilton, first of the Caledonia, to take or destroy three brigs lying under the protection of a strong battery at Pointe du Ché ; and, as the enemy had been known to have strengthened his position with four field-pieces and a party of artillery stationed on a low point of the beach situated under the battery, as well as by a strong detachment of cavalry and infantry in the adjoining village of Angoulin, a body of 130 marines commanded by Captains Thomas Sherman and Archibald M’Lachlan, Lieutenants John Coulter and John Couche, and Lieutenant Robert, John Little, of the marine artillery, were added to the division of seamen from the three ships.

At about 2 h. 30 a.m. on the 28th, the marines were landed under Pointe du Ché ; but, notwithstanding the near approach of the boats before they were discovered, the alarm was given by the brigs, and an ineffectual fire was immediately opened from the enemy’s guns. Lieutenant Little pushed forward with the bayonet to the assault, supported by Captain M’Lachlan’s division, and by a detachment under Lieutenants Coulter and Couche, and quickly carried the battery and spiked the guns. At the same time Captain Shearman, with his division of marines, took post on the main road by the sea side, with his front to the village, and one of the launches with an 18-pounder carronade on his right. In a few minutes a considerable body of men advanced from the village, but were checked in their approach by a warm fire from the marines and the launch. At. this period the enemy had succeeded, under cover of the dark ness, in bringing a field-piece to flank the line; but which the British picket immediately charged with the bayonet and took, putting the men stationed at it to flight. In the mean time the seamen had effected the capture of two of the brigs, and the , destruction of the third