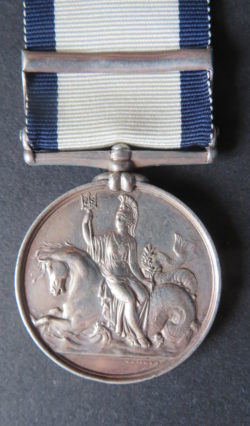 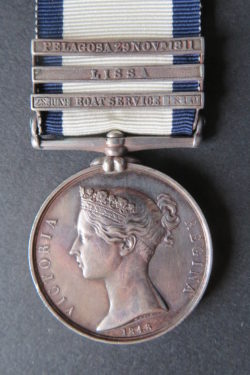 Product added! Browse Wishlist
The product is already in the wishlist! Browse Wishlist
SKU: A8614 Category: Single Campaign Medals
Naval General Service, 3 clasps, 28 June Boat Service 1810, Lissa, Pelagosa 29 Novr. 1811
Richd. Bowen, Midshipman.
Confirmed on the rolls as a Midshipman aboard H.M.S. Active at all three actions.  24 clasps issued for ‘28 June Boat Service 1810’; 124 for ‘Lissa’; and 64 for ‘Pelagosa 29 Novr. 1811’.
‘Richard Bowen entered the Navy in June 1806, as an Able Seaman on board the Glatton 50, Captains Thomas Seccombe, Henry Hope, and George Miller Bligh, employed in the Mediterranean, on which station he removed, as Midshipman, in Sept. 1809, to the Active, of 46 guns, Captain James Alexander Gordon. While belonging to that frigate he took part, 13 March 1811, in the brilliant action off Lissa, where a British squadron, carrying in the whole 156 guns and 879 men, completely routed, after a conflict of six hours, and a loss to the Active of 4 killed and 24 wounded, a Franco-Venetian armament, whose force amounted to 284 guns and 2655 men; and on 29 November in the same year he further shared in a hard-fought action of an hour and 40 minutes which, in rendering the Active captor of La Pomone, of 44 guns and 332 men, occasioned her a loss of 8 killed and 27 wounded.
From June to November 1812, Mr. Bowen next served in the Namur 74, Captain Charles John Austen, and Seahorse 38, commanded by Captain Gordon. He then joined the Sceptre and Albion 74’s, bearing each the flag of Rear-Admiral George Cockburn, and was for 20 months very actively employed on the coast of North America. After acting for nearly five months as Lieutenant of the Ruby 64, Captain Andrew Fitzherbert Evans, Mr. Bowen was confirmed to that ship by commission dated 13 April 1815. He returned home from Bermuda on board the Buffalo in March, 1816, and has not since been afloat. In July 1851, his name was placed on the reserved list.’
During Bowen’s service aboard 38 gun frigate, Active the ship was engaged, On 14 June, 1810,  with frigates Cerberus,  and Swallow, in the capture three gunboats – the Vincentina, Modanese and Elvetica (or Elvetria).
On 28 june, 1810, boats of the frigates, Active, Amphion,  and Cerberus,   attacked of twenty-five vessels at Grao, five ships were captured, the rest destroyed.
On 4 February 1811 Active and Cerbrus sent in their boats to raid Pescara. The British destroyed one trabaccalo, after first transferring its cargo to Active, and sent another three to Lissa. All four were from Ancona.
Five days later the boats from Active and Cerbrus raided Ortona. Despite facing heavy fire, the British suffered only four men wounded. They captured one trabaccolo and ten Venetian transports that were carrying supplies from Ancona to the French at Corfu. The British sent all the vessels they captured to Lissa, or destroyed them.
Lissa
On 14 March Active participated in the Battle of Lissa, where she lost nine men killed and 26 wounded from  her crew of c. 285, but together with Cerberus captured the French frigate Corona. Active, Amphion, Cerberus, and Volage encountered a French force consisting of five frigates, one corvette, one brig, two schooners, one gun boat, and one xebec. The French force had double the guns and triple the number of men relative to the British force. The British also captured the frigate Bellona and caused the frigate Favorite to run ashore where she blew up.  Flora (or Flore) also surrendered but then sailed off again while Amphion, to which she had struck, was capturing Bellona.
On 27 July Active’s boats attacked a convoy in the port of Rogoznica on the Dalmatian coast that was carrying grain to the garrison at Ragusa.  A landing party captured a fort on a hill overlooking the port and the remaining boats then entered. There they found three gunboats and 28 transports. The British brought out the three gunboats and 18 transports after burning 10 of the transports. Active suffered only four men wounded; the French appeared to have lost a number of men killed and wounded.
Pelagosa
Active participated in the destruction of a French convoy at the action of 29 November 1811.  In the engagement, the British captured the frigate Pomone and the storeship Persanne. The action cost Active eight men dead and 27 wounded, with Captain Gordon hit by a cannonball that severed his knee, leaving his leg hanging by a thread. Amputation proved necessary but Captain Gordon, complete with a wooden leg, was still able to sail the Seahorse (with Bowen again serving), Active shared the prize money with Alceste, Unite, Kingfisher, and Acorn, which were either in sight, or sharing by agreement.
A fine N.G.S. a minor edge bump