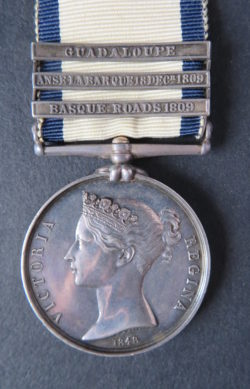 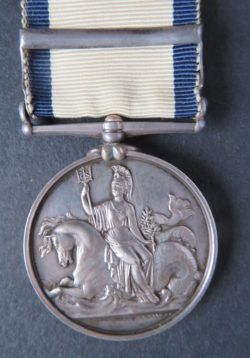 Product added! Browse Wishlist
The product is already in the wishlist! Browse Wishlist
SKU: A8588 Category: Single Campaign Medals
Naval General Service, 3 clasps, Basque Roads 1809, Anse La Barque 18 Decr 1809, Guadaloupe
James G. Gordon, Lieut.
40 clasps issued for ‘Anse La Barque 18 Decr 1809’,
Rear Admiral James Gabriel Gordon entered the Navy on 19 August 1801, as First-Class Volunteer, on board the Vengeance 74, Captain George Duff, of which ship, successively stationed in the Channel and West Indies, he became Midshipman 5 September following. During the years 1802-03 he appears to have been employed at Portsmouth on board the Neptune 98, Captains Erasmus William Austen and William O’Brien Drury, Topaze 38, Captain Willoughby Thos. Lake, and Puissant 74, Captain John Irwin. Joining then the Illustrious 74, Captains Sir Charles Hamilton, Michael Seymour, William Shield, and William Robert Broughton, he commanded the barge belonging to that ship at the cutting out of a brig from Vivero Harbour, was also present at the attack on the French fleet in Aix Roads, and had further charge of a gun-boat during the expedition to the Walcheren, where he was severely wounded.
On 18 December 1809 Mr. Gordon, while in the Freija frigate, witnessed the capture, at Guadeloupe, of the two French frigates Loire and Seine. He shortly afterwards joined the Pompée 80, bearing the flag of Sir Alexander Cochrane, by whom, on 22 January 1810, he was promoted, in consequence of a death vacancy, to a Lieutenancy in the Guadeloupe sloop, Captain Michael Head, part of the force employed at the ensuing reduction of the island bearing that name. Being confirmed by the Admiralty 3 October following, Mr. Gordon next joined – on 6 of the same month, the Tonnant 80, Captain Sir John Gore – and in 1812-14, the Egmont, Porcupine, and Queen, flag-ships on the Home and Mediterranean stations of Rear-Admirals Sir George Hope and Charles Vinicombe Penrose, under the latter of whom, after sharing in the operations connected with the forcing of the Gironde in April, 1814, he officiated as Flag-Lieutenant until the receipt of his second promotal commission bearing date 20 July, 1815. With the exception of a three years’ command in the Ordinary at Sheerness, which he held from 28 April, 1827, until 1830, he remained on half-pay till 31 December 1846, when he assumed command of the Ocean 80, guard-ship at Sheerness, and subsequently, 11 January 1848, the Ganges, and, 1 March 1848, the Wellington. He was superseded, 20 July 1851, and promoted to be a Captain on the Reserved List. He became a Retired Rear-Admiral on 1 July 1867, and died in 1871 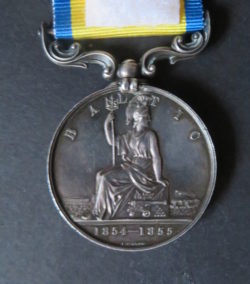