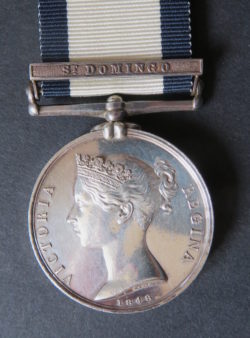 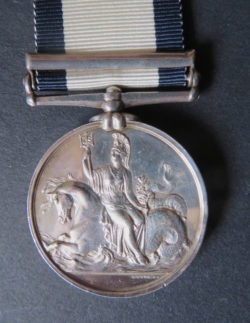 Product added! Browse Wishlist
The product is already in the wishlist! Browse Wishlist
SKU: A8593 Category: Single Campaign Medals
Naval General Service, clasp, St. Domingo
William Stewart, Gunner.
William Stewart is confirmed on the rolls as a Gunner aboard H.M.S. Kingfisher at St Domingo (10 clasps issued to this ship). He entered Kingfisher as a Gunner ‘per warrant from Rr Adml Cochrane’ on 30 January 1805, and appears on the muster rolls for that ship until he was discharged on 17 July 1810, ‘Superseded’.
Kingfisher (18),  was attached to the British squadron under Admiral Sir John Thomas Duckworth. On 1 February she brought intelligence that a French squadron of three sail of the line had been seen steering towards the city of Santo Domingo. Duckworth gathered his squadron and on 6 February met the French in the Battle of San Domingo. Kingfisher was highly commended for her services in the aftermath of the action, with Cochrane being promoted to Post-captain.
During the five years Stewart’s service as Gunner, Kingfisher saw fine service. On 11 April 1805, her boats cut out the Spanish privateer Damas from an anchorage under Cape St. Juan.
On 27 June, 1805, when about 180 miles to north-east of Barbuda, Kingfisher, Captain Richard William Cribb, and Osprey, Captain Timothy Clinch, found themselves being chased by French frigates. While making sail to escape, the two sloops hoisted signals and fired guns, as if signaling to a fleet ahead. Their pursuers immediately gave up the chase, which gave Kingfisher and Osprey the opportunity to catch up with a group of 15 French merchant vessels with cargoes of rum, sugar and coffee. The two British sloops left all 15 merchantmen in flames.
On 16 December Kingfisher captured the French privateer Elisabeth, out of Guadaloupe after a 12-hour chase. Elizabeth was armed with ten 6-pounder guns and four 9-pounder carronades and was commissioned into the as HMS Elizabeth.
Removed to the Mediterranean in October 1807,  Kingsfisher was operating off the Turkish coast near Karaman, when on 27 June 1808 she captured the French letter of marque Hercule after a six-hour chase and an hour-long fight. Hercule, under Gerome Cavassa (a member of the Legion of Honour), was carrying a cargo of cotton from Aleppo and Cyprus to Marseilles or Genoa. She was armed with 12 guns, ranging in size from 8-pounders to 18-pounders.  Kingfisher suffered extensive damage to her rigging but had only one man slightly wounded.
On 1 October 1809, Kingfisher joined a squadron at the capture of the port of Zante.
No details of service at this prior to 1805 or after 1810. Presumably as advanced to Gunner by 1805,  Stewart would have seen some years service by this time. 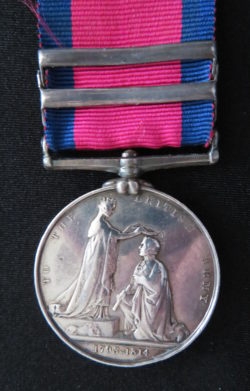 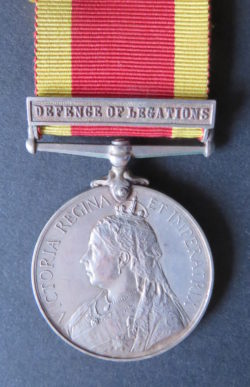