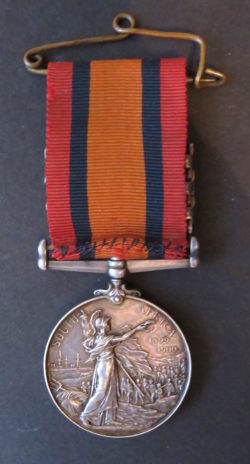 '"The smartest subaltern in the regiment" is the tribute paid to him by an officer of the horse. Serving under Lieutenant Leckie in No. 2 troop are also A. W. O'Brien and R. H. Painter of this city. May the "God of War" deal kindly with our boys, who are a credit not only to this city but to the whole Dominion."

'In speaking to a Times representative Lieutenant Leckie gave information concerning the other Greenwood boys who joined Strathcona's Horse. Bob Palmer was wounded in the foot at Geluk Farm last fall and invalided home. Lieut. Leckie saw him in London fully recovered and he was looking for a commission in the South African constabulary which he was likely to receive. O'Brien, teller at the Bank of Montreal here was shot through the arm last December. He also recovered and came home with the troop, remaining at Montreal where he will again join the bank's staff.'

'Some Greenwood Boys Have An Exciting Experience  "B. S. G., a member of Strathcona's Horse, writing to the Victoria Times, gives news of at least two Greenwood boys, Lieut. Leckie, who is no other than Jack Leckie, and O'Brien, former teller at the Bank of Montreal. They are evidently having plenty of excitement. The correspondent says in part:'
"About 15 miles from Lydenburg, on the Crocodile river. Transvaal, Sept. 3.   – Since last writing Strathcona's Horse have undergone a daily series of exciting events, not devoid of danger. On the 30th of August the 3rd Mounted Brigade, which is composed of Strathcona's Horse, the South African Light Horse, the composite regiment mounted infantry (under Major Stewart), and the Chestnut Battery, R. H. A., made a forced march over the mountains west of Watervalunten, in order to get on the north, and by destroying a bridge on the railway, prevent the Boers from getting away, hampered as they were by a number of prisoners, taken at various times throughout the war, until the rest of Buller's column could come up.   On arriving at the foot of the mountains nobody would believe that a man on horseback could ever go along the summit, but we advanced some 12 miles with guns (field) and wagons, our object being to blow up a culvert in rear of a party of Boers in Watervalunten. On coming in sight of said culvert, an officer, who was detailed to destroy it, saw a party of men, evidently British prisoners, leaving the town along the railway in the direction of Belfast. Lord Dundonald immediately countermanded the order for destroying the culvert, and returning to Strathcona's Horse, sent Lieut. Leckie (with Sargt. Lockhart, Corp. Grogan and Ptes. Williams, O'Brien, Simpson and McKenzie all of troop 'C Squadron), to proceed into the valley (thousands of feet below us) to find out what the enemy were about. The expedition savored of risk and excitement, for after four hours crawling along sheep-trails, dragging their horses after them, the party found themselves in a ravine on the left of the valley, and a trainload of Boers streaming into the village about a mile from them. To retreat up those steep walls was impossible and Lieut. Leckie, observing a farm house some 600 yards from them, decided to lie low until dusk.   The Boers detrained, took the train behind a few trees and set fire to it. Then they placed some pickets on the railway and road to the south, never suspecting that anyone would attempt to come down the sides of the valley, and Lieut. Leckie's party was actually inside the Boer lines.   At dusk the party took possession of the farm house above mentioned, and a guard was placed to see that nobody left the house to inform the enemy, and our men slept in a house for the first time since leaving Calgary.   At dawn the Boers all withdrew, and Lieut. Leckie occupied the village. The astonishment of the few occupants (non-combatants) who remained in the vicinity may be imagined, and still moreso the advance guard of General Pole-Carew's column, which arrived later in the day, to find Strathcona's Horse in possession. The officer in charge of the above advance guard, on hearing Lieut. Leckie's explanation, said: "Well, I'm hanged, no matter where we go or what we do, you infernal Strathcona's get ahead of us."
Clasps loose on ribbon as tended to be seen on Strathcona medals, Approximately 50-60 medals with the dated reverse were issued, mostly to men of Lord Strathcona’s Horse. At the time, the medals were issued without clasps, with the clasps subsequently being sent to Canada to be attached to the medals privately.
Original ribbon and wire hanger as when presented by the King.
A rare raised date Strathconas's medal and in lovely original state 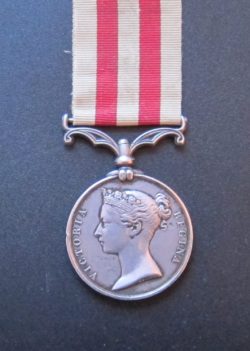 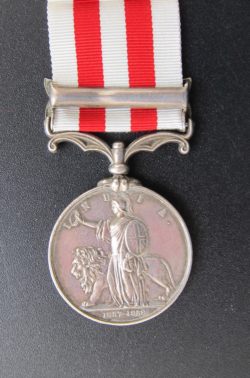