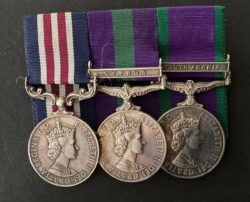 E11R Military Medal group, Chestnut Troop, R.H.A. award for Aden 1966, for his gallantry during a night attack carried out by a force of at least 80 heavily armed dissidents on the Dhala Garrison, 28/29 March 1966. Regularly exposing himself to mortar and small-arms fire, he led his 2 gun section fearlessly during the 8 hour action. One of 11 awards for this theatre 1964-67

‘On the night of 28/29 March 1966 a force of about eighty dissident tribesmen, armed with mortars, rockets, machine-guns and rifles, attacked the Federal Regular Army camp at Dhala. A section of The Chestnut Troop, 1st Regiment, Royal Horse Artillery, formed part of the garrison of the camp. The enemy firing was continuous for over two hours, during which time one Federal army soldier was killed and another wounded. The sangars in which the guns were deployed were hit constantly by bullets.

Throughout the action Sergeant Harrison was in control of the two guns, and was obliged to expose himself outside the protection of the sangar walls to check the accuracy of the laying of the guns and to exercise general control of the gun position. On many occasions, when the position was being swept by heavy and accurate small arms fire, he stood on top of the sangar walls to make certain that the guns were acting correctly on their orders from the Command Post.

Sergeant Harrison gave no thought for his own safety, and his devotion to duty under fire was an inspiration to all on the gun position. It was very largely due to his example of steadiness and courage, and to the thoroughness with which he performed his task that the speed and accuracy of the artillery response was so outstanding.

Remarks of Brigade Commander:
I was present throughout the attack and strongly support the citation. The behaviour of Sergeant Harrison was in the highest British Army tradition of bravery and leadership.

Remarks of Divisional Commander:
I consider that the conduct of this Sergeant in control of his Section under fire was exemplary and in the highest traditions of the Royal Regiment. It is most worthy of recognition.’

Brian Giles Harrison served with The Chestnut Troop, 1st Regiment, Royal Horse Artillery in Aden. The 1st Regiment served in Aden from 1965-67, and was based at Little Aden Barracks opposite the Marine Commando Barracks. The Regiment consisted of 3 Batteries – Chestnut Troop, E Battery and B Battery, and were part of the Dhala Garrison. Harrison distinguished himself when Dhala Garrison came under heavy attack on the night of 28/29 March 1966. The following is given The Gunner, Vol. XLVIII No. 11, November 1966:

‘The Queen has approved the award of the Military Medal to Sergeant Brian Harrison of The Chestnut Troop, 1st Regiment, Royal Horse Artillery. The award has been made as the result of Sgt. Harrison’s devotion to duty, regardless of his own safety, during a heavy attack on the Dhala Garrison on the night of the 28/29th March, 1966.

On this night a large scale attack was mounted by a force of about eighty dissidents against the town and garrison at Dhala. The attack lasted for over two hours, mortars, rocket launchers, machine guns and small arms fire were used, and a considerable amount of the enemy fire was directed into the area occupied by the guns of Alkmaar Section, The Chestnut Troop.

The Section stood-to at 21.30 hrs. and was in action continuously until 05.30 hrs., firing over 70 rounds per gun at no less than 20 separate targets.

For most of this time the Section was under well-directed enemy mortar and small-arms fire which was hitting the gun sangar walls and the command-post.

In order to check the bearing and elevation of the guns on the many different targets, most of them close to occupied villages, Sgt. Harrison was obliged to expose himself regularly to direct enemy fire outside the protection of the sangars.

The accuracy of the shooting throughout the action, and the high standard of drill on the guns, was due in great part to Sgt. Harrison’s devotion to duty regardless of his own safety.

He has been in The Chestnut Troop for five years, and before coming to Aden was with 1st Regiment, R.H.A., in Germany. He is a bachelor who enjoys a wide variety of outdoor activities including water-skiing, sailing, canoeing, climbing and skiing.’

Sold with a copy of The Gunner, Vol. XLVIII No. 11, November 1966, in which appears an article on the recipient, with a photograph of him in uniform. 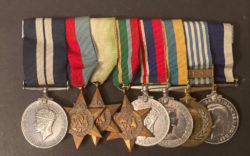